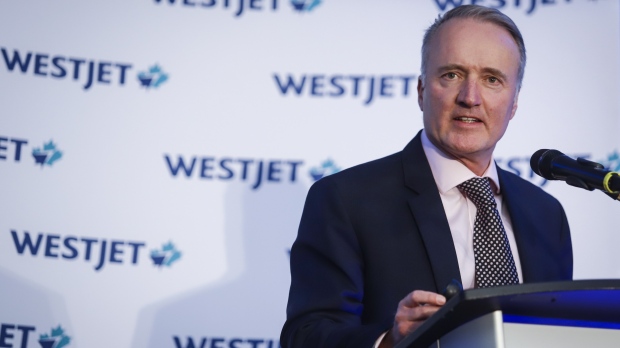 OTTAWA - WestJet CEO Ed Sims says the federal government's aid package for Air Canada could be “problematic” unless his company gets equitable treatment, as talks over pandemic relief continue between Ottawa and Canadian carriers.

In a memo obtained by The Canadian Press, Sims told employees the government is now the fourth-largest shareholder in their biggest competitor, spurring him to insist on comparable terms at the negotiating table.

“It was bittersweet to learn this week of the relief package for our largest competitor. Sweet that the government has finally recognized the vital role airlines play in our national economy. But bitter nonetheless that by total contrast to the U.S. or U.K., our government has not taken a sector-wide approach and has instead chosen to negotiate one by one,” he said in the memo.

Canada is the only G7 country to steer clear of a sector-specific bailout for the aviation industry.

The pandemic relief deal announced Monday grants Air Canada up to $5.4 billion in loans plus a six per cent equity stake in the company for $500 million in exchange for pledges to restore regional routes, cap executive compensation at $1 million and maintain current job levels.

Crucially, it also compels Air Canada to refund customers whose flights were cancelled due to COVID-19. The airline reported it held $2.3 billion in advance ticket sales during the fourth quarter of 2020 while thousands of would-be passengers who had already paid for tickets remained in the lurch.

Travel restrictions introduced through the beginning of the COVID-19 pandemic have been catastrophic for the airline sector, as passenger numbers and profits plummeted and tens of thousands of workers lost their jobs.

Transat AT, which owns Air Transat, and Porter Airlines are also involved in discussions.

Transat is requesting a $500-million loan from Ottawa, on top of cash to help cover refunds.

It is hoping the two sides can reach an agreement in “the coming weeks,” said spokesman Christophe Hennebelle.

“We're at an advanced stage,” he said, describing the Air Canada package as a “positive sign.”

Negotiations began in earnest after plans for Air Canada's $190-million acquisition of Transat began to falter in mid-February.

Porter, whose planes have not taken off since March 2020, borrowed $135 million from Export Development Canada that same month. Since then it has hoped to receive a government loan rather than handing over a slice of the company to Ottawa via direct investment.

“That's probably the main emphasis of those discussions, but we're not going to preclude anything and see what they're willing to offer,” said spokesman Brad Cicero.

“Air Canada may have provided a bit of a framework with what they agreed to, but not everybody will get a version of the same thing.”

Mike McNaney, president and chief executive officer of the National Airlines Council of Canada, an industry group, said his eye is on the federal budget, slated to drop on Monday.

McNaney said he is hoping for a safe aviation restart strategy that takes advantage of testing and contract tracing while avoiding mandatory vaccine passports, to which he is “absolutely opposed.”

“It's going to be critical for that sustainment of jobs - Canadian jobs - and investment and service that we have a clear restart plan developed for both international as well as domestic. We can't lose sight of that,” he said.

On Thursday, Nav Canada announced it would not reduce service at seven air traffic control towers from Whitehorse to Windsor, Ont., a move it had been mulling amid low flight volumes.

“Maintaining appropriate service in our local communities will allow Nav Canada to continue to provide air navigation services required to support industry today and throughout the recovery,” Transport Minister Omar Alghabra said in a statement.