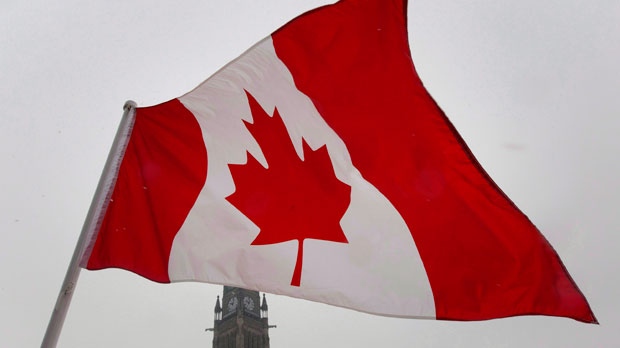 The Canadian flag is shown blowing in the wind in this undated photo.

MONTREAL -- Two items often held up as cornerstones of Canadian values -- the Charter of Rights and Freedoms and universal health care -- are tops among things that help unite the country, according to respondents to a new poll.

In the online survey, conducted ahead of Canada Day by Leger Marketing for the Association for Canadian Studies, respondents were asked to rank 11 items in terms of whether they help unite Canadians.

The charter and health care placed well ahead other options, obtaining 25 per cent and 22 per cent of the first-place votes, respectively.

Hockey and the country's "shared history" placed a distant third and fourth, with 12 per cent and 11 per cent of the first-place votes, respectively.

Jack Jedwab, executive vice-president of the Association for Canadian Studies, said the findings present a portrait of a country that has gradually shifted over the last half-century.

"It's a different way to looking at Canada than, say, 50 years ago, prior to the existence of the charter," Jedwab said.

"And universal health care, since the 60s, has been a powerfully attractive element of what it keeps Canada united."

Fears about the threat of Americanization and Canada's ties to the monarchy were given little significance -- each chosen first by only two per cent of respondents.

The findings are based on a survey of 1,509 respondents between June 24 and June 26.

Sam Roper, a 31-year-old Montrealer, said he wasn't surprised by the results.

For his part, "health care" was the first thing that came to mind when asked about what helps unite Canada. He added that hockey, his favourite sport, is also something that can be shared with people across the country.

"It seems like you can compare it to soccer in Brazil -- it's something you do from a very young age," he said.

Some more detail on the poll:

They had 11 options to choose from. Here they are along with the percentage of first place votes:

Canadian Charter of Rights and Freedoms (25 per cent)

A shared history (11 per cent)

Respect for provincial jurisdiction (6 per cent)

The threat of Americanization (2 per cent)

The monarchy (2 per cent)

The organization the poll was conducted for, the Association for Canadian Studies, says on its website that it "initiates and supports activities in the areas of research, teaching, communications, and the training of students in the field of Canadian Studies." It also says it strives to raise public awareness of Canadian issues.