What we know about J&J's single-dose vaccine, set to arrive at the end of April 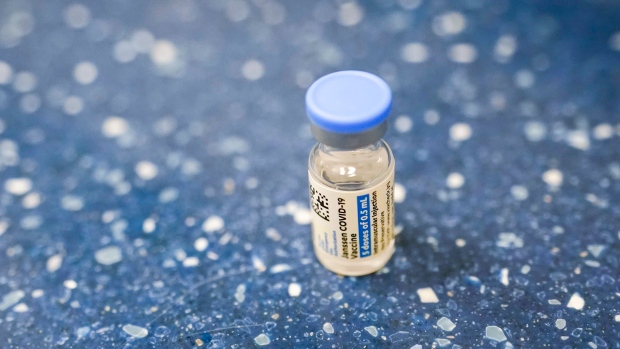 A vial with the Johnson & Johnson's one-dose COVID-19 vaccine is seen at the Vaxmobile, at the Uniondale Hempstead Senior Center, Wednesday, March 31, 2021, in Uniondale, N.Y. The Vaxmobile, is a COVID-19 mobile vaccination unit, sponsored by a partnership between Mount Sinai South Nassau and Town of Hempstead to bring the one-dose vaccine directly to hard-hit communities in the area. (AP Photo/Mary Altaffer)

Canada will soon add another COVID-19 vaccine to its supply, with procurement minister Anita Anand announcing this week that initial shipments of Johnson & Johnson's single-dose jab are to arrive by the end of April.

Canada approved the vaccine in early March and had pre-ordered 10 million doses, but manufacturing problems from the company led to shipment delays to Canada and elsewhere.

Anand did not have details when she made her announcement Tuesday about how many doses would be included in the first shipment.

Johnson & Johnson gives Canada four distinct vaccines -- along with Pfizer-BioNTech, Moderna and Oxford-AstraZeneca -- and its one-and-done element adds flexibility to the country's plan to immunize the majority of its residents by September.

Dr. Sumon Chakrabarti, an infectious disease expert in Mississauga, Ont., says that while the vaccines are arriving later than expected, they'll be a welcome addition to Canada's rollout.

"A single-dose vaccine, as well as the fact it only requires a regular fridge (to store it), that is so huge in terms of taking this vaccine and bringing it to targeted populations," he said. "I wish it was (arriving before) the end of April, but I'll take it."

Here's what we know about Johnson & Johnson's vaccine:

HOW EFFECTIVE IS IT?

Johnson & Johnson announced promising results from its Phase 3 clinical trials at the end of January, suggesting its vaccine reduced severe COVID-19 disease by 85 per cent, and prevented 100 per cent of COVID-related hospitalization or death.

The vaccine had a 72 per cent efficacy in preventing COVID infections after 28 days in the company's U.S. trials. The efficacy dropped to 66 per cent when averaging in results from other global trials, including a South African study that factored in more transmissible variants of the COVID virus.

Pfizer and Moderna showed 95 per cent efficacy in their respective trials, but those were tested against previous dominant strains and didn't account for variants that have popped up since.

Pfizer, Moderna and AstraZeneca also had zero hospitalizations and deaths in their trials.

Chakrabarti says it's important to distinguish the timing of the four trials, and stressed that they all work exceedingly well the metrics that matter most.

"All four of these vaccines ... are exceptionally effective at preventing hospitalization and death," he said. "Those are the two things that we care about."

WHAT ARE THE BENEFITS OF THIS VACCINE?

The ease of distribution offered by a single-dose shot -- unlike the two-dose vaccines from Pfizer, Moderna and AstraZeneca -- and its ability to be stored in a regular fridge are among Johnson & Johnson's biggest strengths.

"You can transport the vaccine there and just boom, boom, boom, get it into people's arms," he said. "The timing doesn't help -- we really wanted to start (vaccinating) essential workers as quickly as possible ... But it's something you can do (easily) with J&J."

Chakrabarti added that Johnson & Johnson may also benefit from not having the string of confusing messaging surrounding it that AstraZeneca has had.

Canada's National Advisory Committee on Immunization (NACI) has set age recommendations on AstraZeneca three times. The latest recommendation is to pause the use of AstraZeneca in those under 55 due to rare blood clot links that were observed in Europe.

Omar Khan, an assistant professor in biomedical engineering at the University of Toronto, says Johnson & Johnson could slot into the void left by provinces not using AstraZeneca on those under 55.

"That (decision by NACI) effectively reduced our vaccine supply," Khan said. "But with this we can make up that loss of supply for that population and hopefully get us back on track."

The fact that Johnson & Johnson is already in use in the U.S. may give Canadians more confidence in it, Chakrabarti says.

The FDA approved Johnson & Johnson on Feb. 27, but shipments to the U.S. were also affected by manufacturing problems early on. The bulk of vaccine use in the U.S. has been Pfizer and Moderna.

"It's very good when you see other countries having experience with it," he said, adding that a mountain of positive AstraZeneca data also exists from the U.K., as well as data from Israel on the high effectiveness of Pfizer.

WHAT KIND OF VACCINE TECHNOLOGY IS USED?

Unlike the mRNA used in Pfizer and Moderna's products, Johnson & Johnson is a non-replicating viral vector vaccine similar to AstraZeneca's.

That means it uses a different harmless virus, which can't copy itself, as a vector to give our cells the instructions they need to make the coronavirus's spike protein.

The immune system recognizes the protein and makes antibodies, which then allow us to fend off attack if exposed in the future.

Khan says it takes a couple weeks for the body to build up immunity with any of the vaccines, but those receiving Johnson & Johnson should especially take note of that.

"Yes, it's one dose so people might say 'one and done, ready to go,' but you still need to give yourself the bare minimum two weeks," he said. "Ideally, give yourself a month, and then you'll have a higher level of protection."

This report by The Canadian Press was first published April 1, 2021.