When COVID-19 vaccines could be available: What we know so far 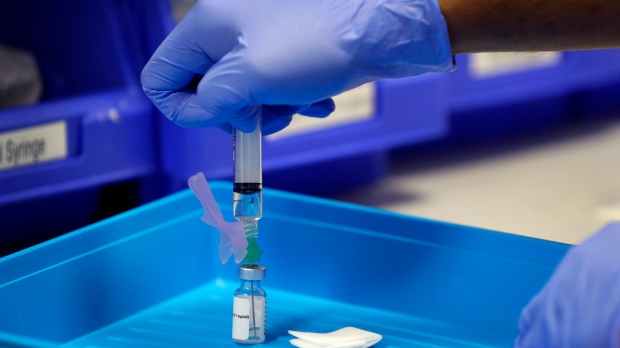 A senior clinical research nurse prepares the COVID-19 vaccine to administer to a volunteer, at a clinic in London, Wednesday, Aug. 5, 2020. (AP Photo/Kirsty Wigglesworth)

OTTAWA - Vaccines are now a bright spot of hope on the COVID-19 pandemic horizon. But much about them, and their rollout in Canada, remains up in the air. Here's what we know so far:

What are the leading candidates?

Manufacturers Pfizer, Moderna and AstraZeneca have all filed applications to have their vaccine candidates approved in Canada. Under a “rolling submission” process, producers hand over data - from animal tests, for example - as it comes rather than as a complete package.

That information includes how the vaccine candidates perform in different demographic groups and data about possible harms and risks.

Dr. Supriya Sharma, chief medical adviser at Health Canada, says final data packages for some vaccines are expected as soon as the next few days, and that the vaccine being developed by Pfizer and BioNTech could get the green light next month.

Why don't we know when they'll be distributed?

The Liberal government says the first vaccine shipments should start to roll off tarmacs and port terminals early next year, bound initially for priority groups, including seniors in long-term care homes and front-line workers. But much about the deployment process has yet to be announced.

Canada has struck purchasing deals with five pharmaceutical manufacturers, and agreements in principle with two more, paving the way for at least 194 million vaccine doses if all their products are eventually approved. But remaining question marks include which vaccines will pass muster and when and how details of provincial allocations from Ottawa will be nailed down.

Meanwhile, the country's limited manufacturing capacity has curtailed domestic vaccine production options and resulted in greater dependence on vaccines made in foreign countries, which tend to prioritize their own citizens.

What are the logistical hurdles?

Distributing a vaccine poses massive logistical challenges. The unprecedented process involves providing up to two doses of a vaccine - which the leading candidates require instead of just one - to nearly 38 million Canadians spread across a vast country within several months. Ottawa is taking the lead on procurement and overall distribution, but on-the-ground delivery will be handled by the provinces, creating a complex deployment chain.

Some vaccines are easier to move around than others. The Pfizer vaccine needs to be transported and stored at -70 C to remain effective, which would slow its rollout, though Ottawa has already purchased some cold storage for the Pfizer and Moderna vaccines. The Moderna vaccine candidate also requires freezing but not at the same temperature as the Pfizer candidate.

AstraZeneca's vaccine is even less finicky about storage temperature but the company said Thursday that promising results from its clinical trials need further validation.

Meanwhile the government is trying to contract transport companies for vaccine shipments. On Friday, Trudeau named Maj.-Gen. Dany Fortin, who commanded NATO troops in Iraq, to head up the Canadian military's role in co-ordinating logistics and lead the vaccine's eventual rollout across the country.

Experts believe more than half of Canadians will be inoculated by September “if all goes well,” Trudeau said.