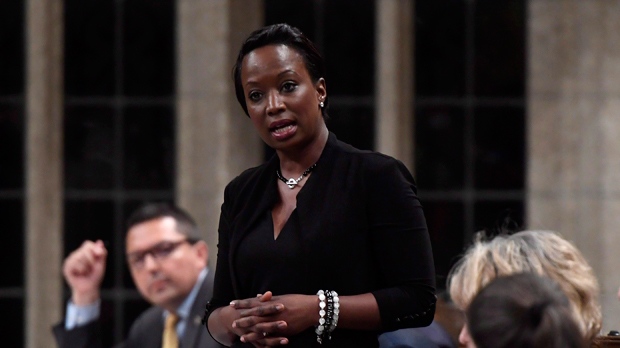 Parliamentary Secretary to the Minister of International Development Celina Caesar-Chavannes rises during Question Period in the House of Commons on Parliament Hill in Ottawa on Friday, May 25, 2018. THE CANADIAN PRESS/Justin Tang

WHITBY, Ont. -- Liberal MP Celina Caesar-Chavannes says she will not be seeking re-election in October in her riding of Whitby, Ont.

In a statement posted to Twitter on Saturday, the rookie MP said it was a “personal decision” based on a number of factors, and she informed Prime Minister Justin Trudeau on Feb. 12, although her reasons arose before then.

“Over the course of the last three and a half years ... I had the opportunity to work with some fantastic colleagues, debate policy, put forward ideas and shape tremendous pieces of legislation that will have a real and positive impact on families across the country,” Caesar-Chavannes wrote.

“It is an honour I never took for granted, and will not soon forget. That is why this announcement is a tremendously difficult one for me to make.”

Caesar-Chavannes said her decision is not related to the SNC Lavalin controversy, which concerns whether Trudeau and others pressured former justice minister Jody Wilson-Raybould to help the engineering firm avoid a criminal prosecution over allegedly corrupt business dealings.

“I have tremendous respect for Ms. Wilson-Raybould and this will never change,” Caesar-Chavannes wrote Saturday.

Caesar-Chavannes, who is black, has also been vocal on issues of race. In May 2018, she and then-Conservative MP Maxime Bernier got into a Twitter dispute when Bernier accused Caesar-Chavannes of thinking “the world revolves around (her) skin colour.”

Caesar-Chavannes responded to Bernier by pointing out that she deals with policy on a daily basis.

“Unlike you however, I can focus on policy while also shifting the status quo and increasing awareness,” she tweeted. “That's what happens when you #AddWomen. We get more done!”

That wasn't the first time the two had clashed online. In March 2018, Caesar-Chavannes apologized to Bernier on Twitter after telling him to “check your privilege and be quiet” in a heated discussion about funding for minority communities.

Bernier did not seem open to the idea, telling Caesar-Chavannes he did not think the two could find much “common ground.”

On Saturday, Caesar-Chavannes said that even though she will soon no longer be an MP, she hopes she inspired others to create change through political involvement.

“As I move on to different adventures and part ways with this role in politics, know that I will not be too far away,” she said.

“I will continue to push boundaries, dismantle the status quo and break glass ceilings, and I hope you will expect no less from me.”