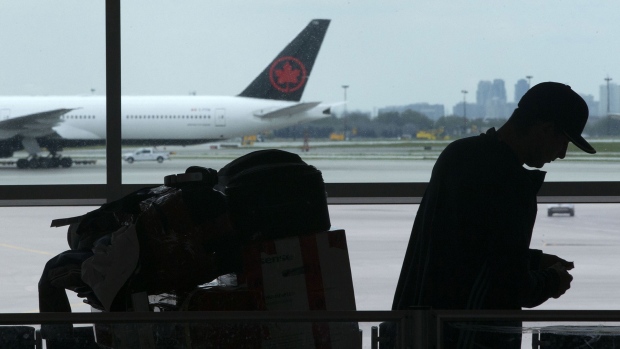 A passenger waits beside their luggage at the departure terminal at Toronto Pearson Airport, in Mississauga, Ont., Friday, May 24, 2019. THE CANADIAN PRESS/Chris Young

A Whitby resident has been charged after allegedly using a fake COVID-19 document after arriving in Toronto from an international flight.

On Tuesday, shortly before 5 p.m., Peel police were called to Toronto Pearson Airport to assist the Canada Border Services Agency (CBSA) with an incident concerning a fraudulent COVID-19 document.

A CBSA officer was conducting an inspection check of a man’s entry documents, including a COVID-19 document.

A Public Health Agency of Canada officer also reviewed the man's document and deemed it to be fake, police said.

A 57-year-old man from Whitby was subsequently arrested and charged for utter forge document.

His identity has not been released.

The man was eventually returned to the Public Health Agency of Canada for processing.

It is unknown if the man had to quarantine in federal-run hotels.

He is scheduled to appear in court on July 5.

Canadian travellers on an international trip must take a COVID-19 test 72 hours prior to their flight home and test negative in order to return to the country.