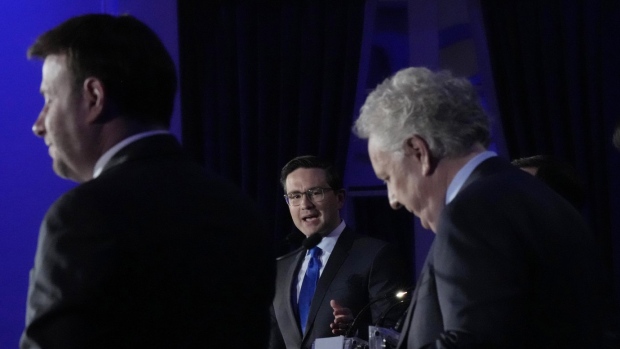 OTTAWA - Now that the second official debate of the race is out of the way, Conservative leadership hopefuls will turn their attention to signing up as many supporters as they can before a fast-approaching deadline.

The party's leadership election organizing committee says it is already breaking records for how many new members candidates have drawn in ahead of the June 3 cutoff date for new members being able to vote.As of last week, officials were bracing for a voting base of more than 400,000 members by the deadline.

In comparison, the party had nearly 270,000 members signed up to vote in its 2020 leadership contest.

The six candidates vying to replace former leader Erin O'Toole met on stage Wednesday for a French-language debate in Laval, Que. - a province where the Conservative Party of Canada has never won more than a dozen seats.

A rowdy crowd of several hundred booed and cheered throughout the night as candidates took turns lacing into each other's records, including on controversial pieces of Quebec legislation.

Ottawa-area MP Pierre Poilievre, a perceived front-runner in the race who has been drawing large crowds at rallies across Canada, repeatedly stressed his opposition to the Quebec secularism law known as Bill 21, which prohibits certain public servants in positions of power from wearing religious symbols on the job.

Former Quebec premier Jean Charest and Ontario mayor Patrick Brown - considered his main rivals - both accused Poilievre of not clearly stating his position on the law when speaking to Quebecers, which he denied.

Grassroots Conservatives are looking for leadership candidates who can draw many new faces into the party, including in Quebec where membership numbers are low.

Under new rules adopted last year, a riding must have at least 100 members in order for candidates to nab the full amount of points available to them in the ranked-ballot system used to determine a winner.

A winner is chosen when a candidate earns more than 50 per cent of the votes. In the event they don't, whoever earns the fewest number of votes nationally is dropped from the ballot and the votes they received are redistributed to whichever candidate was marked as their second choice.

Speaking to reporters following Wednesday's debate, which saw Charest and Brown repeatedly attack Poilievre but not one another, Charest said Brown should not be underestimated in the race.

Entering as the mayor of Brampton, Ont., Brown had a reputation in Tory circles for his ability to organize from his time as leader of Ontario's Progressive Conservatives.

He has spent the race criss-crossing the country, meeting with different immigrant and ethnic communities, encouraging them to take out a membership in the party to change Canada's conservative movement.

Among those he's focused his attention on are people from the Tamil, Chinese, Sikh, Nepalese, Filipino and Muslim communities.

Brown promises them a better seat at the political table and pledges to end the lottery system to make family reunification easier. He has also spent the last few weeks equating Poilievre's name with two of the world's most controversial right-wing leaders - former U.S. president Donald Trump and Marine Le Pen, the far-right French politician who recently failed to win a general election.

In another recent address to a Muslim gathering in Burnaby, B.C., Brown took aim at the crowds Poilievre has been attracting.

“Sort of looks like a Trump rally,” he said, before criticizing the lack of racial diversity.

Brown made similar remarks during Wednesday's debate when he accused Poilievre of trying to court the support of people akin to Pat King, a leading voice of the Ottawa convoy protest who has also espoused the so-called white replacement conspiracy theory.

After Quebec, Poilievre was set to travel to New Brunswick, followed by Thunder Bay, Ont., Winnipeg and Saskatoon. He will bring his campaign message of “freedom” from everything from the cost of living to COVID-19 public-health restrictions.