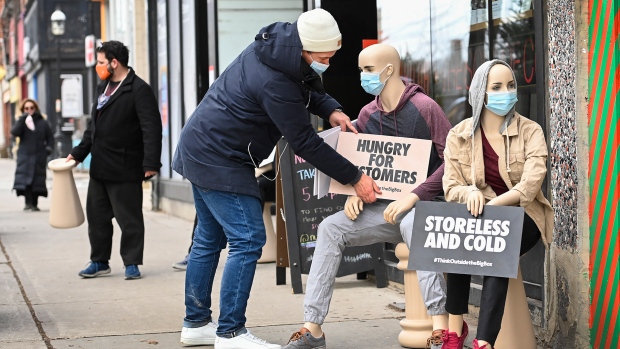 Jacob Gawrysiak adjusts a sign on mannequin with key messages displayed in doorways of select small business pleading for action to support local businesses during the COVID-19 pandemic in Toronto on Tuesday, December 15, 2020. THE CANADIAN PRESS/Nathan Denette

As the December holidays neared, the Old Triangle alehouses across the Maritimes were bustling with Christmas parties and diners revelling in the festive season.

But that energy vanished in recent days as the Omicron variant of COVID-19 raged across Canada and governments brought in new restrictions limiting the capacity at restaurants and enforcing physical distance between patrons.

“It was really, really, really depressing,” said Brendan Doherty, one of the Old Triangle's owners, of the moment he heard his business would be subject to new rules.

“There's been a few dark moments through the pandemic, and that one really felt like one of the darker, even though we've been dealing with this for two years.”

Doherty, like most other small business owners, is lamenting how the “most wonderful time of the year” has become a nightmare of mounting case counts, capacity restrictions or closures and worries many thought were long gone when COVID-19 cases receded over the summer and fall.

They now fear they'll have to shut down once more, lay off staff and perhaps even say goodbye to their businesses for good.

While the Old Triangle is doing its best to stay open through the latest wave of COVID-19, Doherty said even that is a difficult feat and he's already had to reduce operating hours.

“With the current guidelines around testing and isolation in our province, I've got half of my kitchen staff in isolation, and it doesn't look like they're going to get ... test results before Christmas at this point,” he said.

“As far as Christmas around here, it's pretty dark and it's a pretty sad time.”

The outlook is just as gloomy at Louis Cifer Brew Works and Stout Irish Pub in Toronto.

Before restrictions even came into effect, owner and president Erin Gamelin says between 30 and 40 per cent business dried up as Canadians backed away from dining out amid the threat of Omicron.

“It's almost like we don't have to manage only having 50 per cent capacity, because customers are taking it upon themselves to cancel,” she said.

On Saturday, her establishments were booked full with reservations. All but one cancelled.

“This is something that will destroy our industry,” said Gamelin. “Restaurants are barely hanging on month by month.”

Dan Kelly has been inundated with stories like Gamelin and Doherty's since the Omicron variant arrived in Canada and public health officials started moving to quell the virus.

The president of the Canadian Federation of Independent Business said in one example he heard from the owner of a gaming centre that was set to host a 60-person corporate party until the party was cancelled.

“He was going to make $2,000 profit and that $2,000 profit may not seem like much, but that would be the first profitable event he's had in two years,” said Kelly.

The latest round of restrictions and cases has been particularly tough because small businesses have yet to recover from the previous waves, he added.

The CFIB surveyed 4,514 small business owners in November, before Omicron reached its peak, and found only 36 per cent were back to normal sales.

Of those not making normal sales, 22 per cent said they can survive for fewer than six months at their current level of revenue loss.

“Any little glimmer of hope that many businesses saw at the at the end of this two-year tunnel are quickly being extinguished,” Kelly said.

“Any kind of reserves or fat that the businesses might have had has long since been eliminated.”

To make matters worse,this time around there is also little government support. Most of the sweeping relief programs for small business owners and laid off workers ended recently and few have been replaced.

Kelly, Doherty and Gamelin are all calling on the government to bring back support.

“The government is very quick to put restrictions on us and very slow to provide us any relief to continue to support all the people we employ,” said Doherty.

“We're not trying to get rich here. All we want to do is just keep our business, keep our staff employed, so people have a roof over their heads.”