A 22-year-old woman rescued by firefighters after being stranded on a crane at a construction site in the city’s downtown core for more than four hours on Wednesday morning, has been charged with mischief, police confirm.

These charges were laid for endangering the lives of two officers and for impacting work at the construction site, he added.

Toronto police were first called to the area of Church and Wellesley streets shortly before 4 a.m. for reports of a woman trapped on a crane.

Police told CP24 it appears the woman climbed up to the very top of the boom of the crane, crawled out to the end of it, and then somehow managed to slide down a cable onto a the large pulley device where she got stranded.

The block where the woman was sitting measured about two feet long by six inches wide.

'We train for this'

“Obviously the crews really can’t determine what the situation is or what the plan is until they are actually there,” Toronto Fire Chief Matthew Pegg told reporters at the scene.

The initial idea was to secure her to a safety harness and then lower the crane but the plan changed when crews became concerned about safety ropes becoming entangled in the machinery.

Wonfor and the 23-year-old woman ultimately rappelled down to safety at around 8:30 a.m.

“There really isn’t a textbook but I think they just wrote it.”

The fire chief said in total, it took about 2.5 hours for Wonfor to climb up the crane and bring the female to safety.

The woman was placed in handcuffs when she reached the ground.

Speaking to reporters following the ordeal, Wonfor said the female was “very calm” during the rescue.

“She made me calm actually,” he said.

“She had a little, thin coat on but you know what, she was a brave girl. She helped me when I got there so we were both calm.”

“I do a lot of rope work with trees and that plus I’m a bit of a monkey so they thought, you’re the guy,” Wonfor said.

Pegg told CP24 that firefighters training will increasingly focus on high-rise buildings due to Toronto's expansion.

"Our city is very vertical, it's increasing so not only high-and-go rescues like we saw today, but firefighting in tall buildings, our response in evening dealing with medical emergencies in tall buildings poses different challenges," Pegg said. "As we continue to grow and evolve that's a top priority for us is to continue to keep up with the vertical pace and make sure our training and equipment match the needs of the city."

I don't know how she got up there, rescuer says

The acting Toronto fire captain, who was understandably fatigued, said he still planned on playing in a hockey tournament this morning.

Wonfor added that he still does not know how the female got up to the top of the crane, which is approximately 12 storeys tall.

“She is going to tell me later because I need to write it down,” he said. “That’s how I do it next time.”

It is still not clear why she decided to scale the crane in the middle of the night.

“It’s not so much the rationale, you’ll never understand a person’s rationale but the thing that everyone has to take into consideration is the severe impact her actions had on this city -- not only on our emergency personnel, the safety of people and the impact of construction worker’s daily live,” he said.

“People have got to understand.”

Radford said Lazo is cooperating with police in their investigation.

Police are awaiting a cost evaluation from the construction company affected by the incident, he added.

'Police have their hands tied'

Lazo was later transferred to 51 Division where she will be remain in custody overnight, Radford told reporters.

"She will be kept overnight just to ensure her appearance in court and to ensure she doesn't do this again," he said.

"The police have their hands tied here," he said Wednesday afternoon. "Here's why, first of all you worry about copycats -- people going off and doing it again ... she did interfere with property."

Goldkind added these charges won't likely hold up in a courtroom.

"There's very little to this," he said. "The charges will either be dropped and diverted or a little minor slap on the wrist."

Lazo of Toronto is expected to appear in court tomorrow morning. 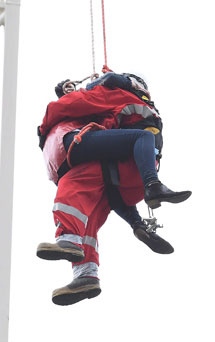 Police escort a woman who was rescued from a downtown Toronto crane early Wednesday, April 26, 2017. Some streets in the downtown core were closed as dozens of construction workers and commuters gazed skyward to watch police and firefighters try to rescue a woman who got stuck atop a tall construction crane during the night. (THE CANADIAN PRESS/Frank Gunn)

A firefighter and a woman trapped on a crane rappel down near Church and Wellesley streets.

Firefighters are rescuing a woman trapped on a construction crane near Church and Wellesley.

A woman is trapped on a crane near Church and Wellesley streets.