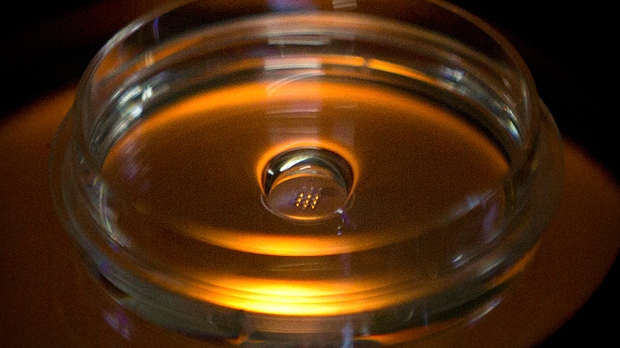 In this Oct. 9, 2018, file photo, a microplate containing embryos that have been injected with Cas9 protein and PCSK9 sgRNA is seen in a laboratory in Shenzhen in southern China's Guangdong province. (AP Photo/Mark Schiefelbein, File)

TORONTO -- A divorced woman cannot have a purchased frozen embryo implanted over the objections of her ex-husband, Ontario's top court ruled on Friday in a ground-breaking case.

In overturning a lower court decision, the Court of Appeal ruled that both former spouses retained rights to the embryo to which neither are genetically related.

“Neither contract nor property law principles govern in this case,” the court ruled. “Parliament has imposed a consent-based, rather than a contract-based, model through legislation and regulation.”

The case arose in 2011 when the couple identified only as D.H. and S.H. purchased four embryos created from anonymous sperm and egg donors in the United States for US$11,500. Two were viable. One was implanted in D.H. and resulted in a now six-year-old son. The second was frozen.

The couple divorced after the birth of their son in late 2012. D.H., who is in her late 40s, wants the second embryo implanted so the couple's son would have a biological sibling. She has also said she would not expect her ex to support a new child.

In court last year, she argued her ex had signed an agreement that, in the event of a split, her wishes would prevail. He argued he had paid for the embryos and they were therefore his. He said he had changed his mind post-divorce and now wanted the frozen embryo donated.

Last summer, Superior Court Justice Robert Del Frate in Sudbury, Ont., sided with D.H. based on contracts the couple had signed when they embarked on the fertility process.

“There is no law on point that has considered how to dispose of embryos when neither party has a biological connection to (them),” Del Frate wrote in his decision. “(However), it would be contrary to contract law were I to decide that the wishes of the parties at the time of entering into this contract were other than what they agreed to.”

Del Frate said D.H. could have the embryo if she reimbursed S.H. for US$1,438 - half the cost of its creation.

S.H. appealed, arguing he had changed his mind after signing the contracts and that the law allowed him to do so. His ex-wife, he argued, would be committing a criminal offence if she had the embryo implanted over his express objection. For her part, D.H. argued his consent was no longer required because they were no longer spouses.

While Del Frate had a tough task deciding the unprecedented case, the appellate court said he was wrong to lean on contract and property law. Instead, the higher court said various provisions of the Assisted Human Reproduction Act and related regulations were in play.

One provision defines “donor” as including a couple who are spouses when the embryo is created - even if neither contributes reproductive material - while another gives either spouse the right to withdraw consent before the embryo is used, the court found.

Despite their divorce, Justice Michal Fairburn wrote for the Appeal Court, both D.H. and S.H. remained the embryo's donor, and the act gives S.H. an unequivocal say in how his ex-wife planned to use it.

“The appellant's unmitigated right to withdraw his consent overtakes any prior contractual agreement to the contrary, and is dispositive in this case,” Fairburn said. “I do not accept that donors may simply contract away their rights to withdraw consent under the criminal law.”

Fairburn called it unfortunate that neither party had raised the rules on consent before Del Frate or even brought them to his attention. Instead, they both maintained the embryo was property governed by contract law.

“The idea that donor consent can become frozen in time, rendered unsusceptible to changes of mind, belies the central importance placed upon consent in the statutory scheme,” Fairburn wrote.