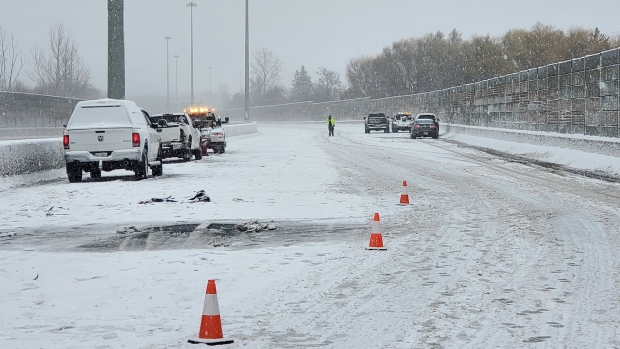 A woman is dead after a multi-vehicle crash in Kitchener Tuesday morning. (Courtesy: Twitter/OPP_HSD)

A woman is dead following a crash in Kitchener on Tuesday morning, according to Ontario Provincial Police.

At around 7 a.m., police responded to a multi-vehicle collision involving at least four vehicles on Highway 7/8 near Fischer Hallman Road.

A 23-year-old woman was killed in the crash, police say.

Initial reports said that a man had died in the collision but police say that is incorrect.

It has not been confirmed if the snowy weather was a factor in the crash.

Waterloo Regional Police say there will be significant delays in the area.

Currently on scene in the area of Hwy 7/8 and Fischer-Hallman Road in Kitchener assisting @OPP_News with a serious collision. There will be significant delays.

Please avoid the area and find an alternative route. More details will be provided when available. pic.twitter.com/t0wKMIvXWb

Police are on the scene of a multi-vehicle crash in Kitchener on Highway 7/8 near Fischer Hallman Road that killed a woman. (Courtesy: Twitter/OPP_HSD)