Woman dead after van mounts sidewalk near Dupont and Christie

Emergency crews were called to that intersection of the city around 4:20 p.m. following reports of a vehicle crashed into a building.

“Information was received that there were pedestrians on the sidewalk, and a vehicle for unknown reasons mounted the curb, striking a pedestrian,” Sgt. Melissa Kulik told reporters at the scene. 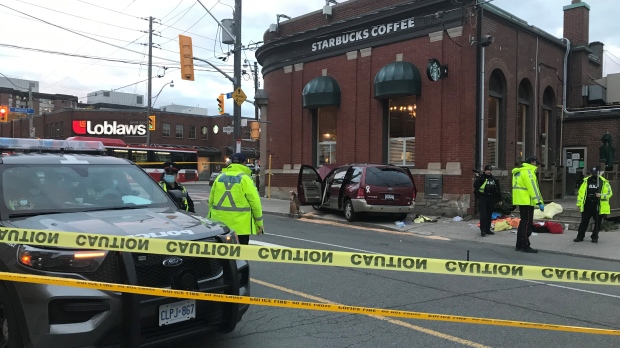 A woman, believed to be in her 70s, was taken to a local hospital in life-threatening condition, Toronto paramedics said. She was later pronounced dead.

Kulik said the driver of the van was also transported to hospital with non-life-threatening injuries.

The circumstances surrounding the crash are under investigation.

“We can’t speculate on anything or any reasons for the collision,” Kulik said. “Through video, through witness statements, that will all be pieced together, and further information will be made available when officers can provide that.”

She said officers are canvassing homes and businesses in the area for surveillance video.

Anyone who might have witnessed the incident is also being asked to contact police or Crime Stoppers.