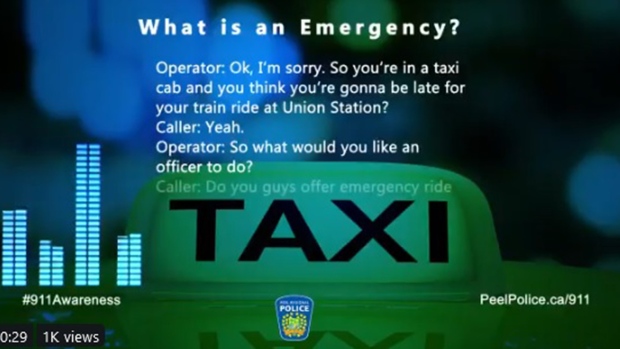 Peel Regional Police released a transcript of a very unfortunate and wasteful 911 call.

In the ongoing fight against people calling 911 for stupid reasons, Peel Regional Police have released audio of a woman calling 911 to ask for a police emergency run so her taxi could reach the train station on time.

“Just in terms of an officer – I am supposed to have a trip to Union Station’ the woman tells the dispatcher. “The ride that was supposed to show for me this morning did not. I don’t know how you guys work with services in terms of that.”

She says that she’s gotten a cab but will likely be late.

“What would you like an officer to do,” the dispatcher replies.

“Do you guys offer emergency ride services or not?”

There’s a pause of incredulity, and then the dispatcher replies.

Being late for a trip is never ideal.

Calling 9-1-1 to ask the police to act as an "emergency" ride service, to get you there on time?

The release of the audio comes as police services across Ontario plead with citizens not to call 911 to complain about ill-timed Amber Alerts, tomatoes in chicken sandwiches, or demands by parents to complete chores.

In one instance in Hamilton, a man was charged criminally for complaining to police about an Amber Alert.