Woman seriously injured after being struck by vehicle downtown 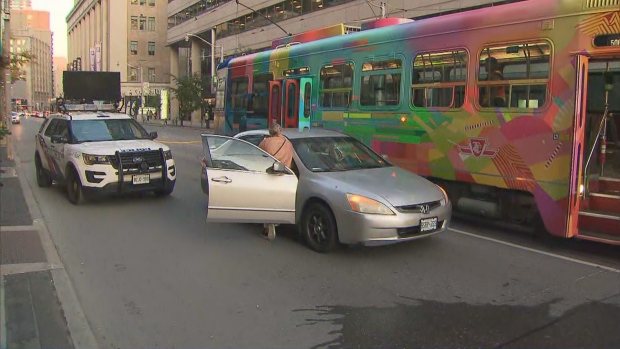 Toronto police are investigating after a woman was struck by a vehicle downtown. (CP24)

A female pedestrian has been seriously injured after being struck by a vehicle in downtown Toronto.

It happened in the area of Bay and College Streets just after 5:45 p.m.

Toronto police said the woman believed to be in her 40s was struck when she was either entering or exiting a streetcar.

Paramedics said they have taken the woman to a trauma centre in serious condition.

The westbound lanes on College Street were blocked between Yonge and Bay streets for investigation. Roads have since reopened.

COLLISION: Bay St/College St, pedestrian struck by car, @TorontoMedics are there with us to help out. No word on injuries yet. Expect closures in the area as we investigate. More to follow. #GO1943394
^rr pic.twitter.com/Dtku2vnuBQ