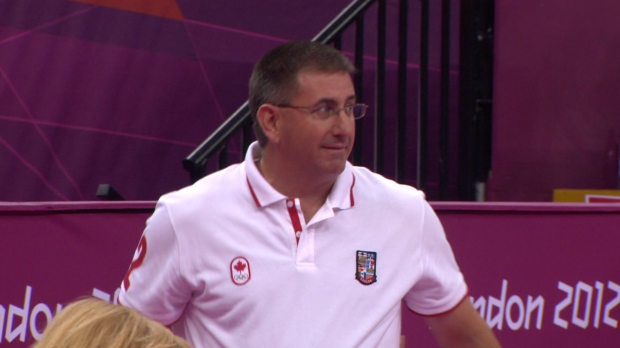 Dave Brubaker was Canada's head gymnastics coach at the 2016 Rio Olympics and was the women's national team director at the 2017 world championships in Montreal.

A woman who accused her former gymnastics coach of sexual assault told his trial on Tuesday that the man controlled every aspect of her life when she was training with him as a teenager.

The complainant, whose identity is protected by a publication ban, testified that Dave Brubaker would routinely kiss her on the lips to say hello and goodbye, starting when she was 12 years old.

"I would say that at the time, Dave had full control over everything -- what time I went to bed, what I ate, how I did my hair," she said at the judge-alone trial taking place in Sarnia, Ont. "Whatever he said, went. I had full trust in him."

The woman, who is now in her 30s, said Brubaker would pick her up from school, and take her to his house where he occasionally would spoon her in bed and tickle her belly, before driving her to practice. She also alleged there were times when he touched her inappropriately during sports massages.

She said she feared the coach would punish her in the gym if she denied his advances.

He was initially charged with 10 sexual offences last December and was placed on administrative leave by Gymnastics Canada, where he had served as director of the women's national team, but the number of charges were reduced Tuesday at the beginning of his trial.

Court heard a few minutes of an interview Brubaker gave to police, which the trial judge will determine whether to include as evidence in the case. In it, Brubaker maintained that his relationship with the girls he coached was innocent.

"It wasn't a power trip," he said in the clip. "I do admit that I liked the girls at that moment. It wasn't in a sexual way."

Brubaker also told police he knew "something was coming" after another gymnastics coach was suspended weeks earlier over allegations of sexual misconduct. He said he understood that he'd never coach again.

"I know that because it's happening on Facebook with everybody saying 'me too," he said.

The complainant in the case, who was the first witness to testify, alleged the spooning incidents involving Brubaker started when she was in high school and continued until she quit gymnastics at 19.

"I remember feeling like bugs were crawling under my skin," she said. "I was very uncomfortable. And sick to my stomach."

Several times, he massaged around her pubic area, she said. On other instances, he would touch her buttocks while hugging her goodbye.

When questioned by the defence, the woman acknowledged telling investigators that she didn't think Brubaker's hands went under her underwear on purpose. She also said it was not uncommon for gymnasts to receive massages.

Brubaker's defence lawyer, Patrick Ducharme, noted that the woman could not remember which hand his client used to touch her buttocks. He also noted that the officer who investigated Brubaker was related to the woman, and was the best man in her wedding.

The woman told the court that she intentionally hurt herself and quit gymnastics when she was 19 because she could no longer handle the pressures of her relationship with Brubaker. She coached for a year after that, she said, but avoided contact with Brubaker when possible.

Ducharme suggested that the woman hurt herself and quit gymnastics around the same time that she realized she wouldn't make it to the Olympics.

"That must have put a tremendous strain on you," he said.

Another former competitive gymnast who trained under Brubaker testified later Tuesday that her former coach suggested his trainees kiss him and his wife -- also a gymnastics coach -- on the cheek as a sign of respect.

She noted, however, that for several years, the only gymnast she saw kissing Brubaker on the lips was the complainant.

The second woman also said she saw Brubaker massaging the complainant in her underwear, before turning to her and saying "you're next."

"I remember thinking, 'I'm not comfortable being massaged in my underwear,' so I went into my room and put on tights," she said.

The charges against Brubaker, who was Canada's head gymnastics coach at the 2016 Rio Olympics, came at a watershed moment for gymnastics in Canada.

Earlier that month, Gymnastics Canada suspended Edmonton-based coach Michel Arsenault over allegations he sexually abused at least three gymnasts in Quebec when they were minors in the 1980s and early '90s. In January, a Mississauga, Ont.-based gymnastics coach was charged over allegations he sexually abused a 15-year-old girl over a four-year period.