The union representing Toronto transit workers is part of a nationwide effort calling for more measures to protect employees after two TTC workers were violently assaulted earlier this month.

On Wednesday, ATU Local 113, the union representing Toronto transit workers, and ATU Canada held a news conference on the rising number of assaults against transit workers across the country.

“Let me be clear, workers don't feel safe and protected by their employer and something needs to be done immediately,” John Di Nino, president of ATU Canada, said.

Sixty-seven transit worker assaults were reported in the last quarter of 2021, according to data from the TTC.

Across Canada, there are more than 2,000 assaults reported every year by transit drivers.

ATU Canada is calling for a national task force to be created in partnership with all three levels of government and transit agencies across the country to combat the rise in assaults.

“We are looking for implementation of reporting and tracking systems to identify the real numbers of assaults,” Di Nino said.

“We require and need de-escalation training for our transit professionals. When they're put into a tough and vulnerable position. They need to know and have the tools of how to move away and de-escalate the situation,” he added.

The news conference comes after two TTC employees were attacked earlier this month.

On Feb. 16, a bus driver was involved in a fare dispute with a group of suspects and was subsequently stabbed multiple times with a knife.

A week earlier, another TTC worker was stabbed in the back at Dupont Station.

Both workers are currently healing at home.

Di Nino acknowledged that many, not all, assaults stem from fare disputes and that a conversation on mitigating these issues needs to be had.

“If we had a fare-free transit system and if we had dedicated operational funding that can mitigate some of those circumstances we might be in a more favorable position,” he said. 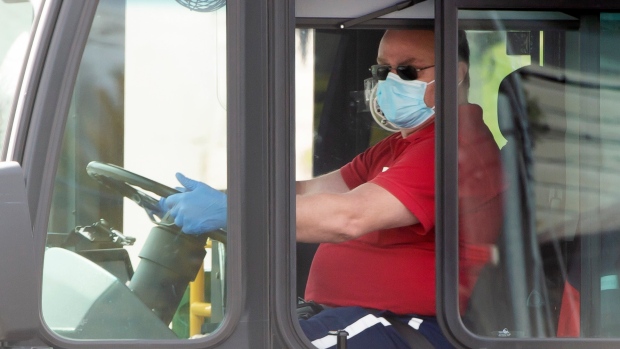 Marvin Alfred, president of ATU Local 113 which represents TTC workers, said a city-wide campaign should be created to raise awareness about the rise of attacks.

“...We need protections and we need to have a campaign of awareness to try to have preventative measures installed to assist transit workers and assist the public feeling safe on transit,” he said.

Mayor John Tory spoke with CP24 ahead of the news conference Wednesday morning and said that a better plan is needed to protect workers.

“I’ve certainly spoken to the TTC CEO and he and I both agree that we should be looking to make sure that there are some practices that can better protect our operators from the kind of danger that they sometimes face from people who are engaging in violence,” he said.

TTC officials met with ATU Local 113 on Tuesday and said they are committed to regular communication to ensure the safety of its workers.

“We take every report of assault and abuse seriously and encourage our staff to report them all. Through increased reporting, we can identify trends, causes and other information that we then use to continually improve our protection and response activities,” the TTC said in a statement.

Di Nino said that employers need to recognize that assaults are critical injuries, and that the court should use its ability to impose maximum penalties when a transit worker is assaulted in the line of duty.

“When we sign up to drive a boss or work in the maintenance facilities we don't sign a letter that says we're okay with an assault. Just like any other safety practice within the work location, the employer needs to take reasonable measures to mitigate the risk to our transit professionals on the front lines.”

Di Nino added that the use of personal protective gear should be considered.

“We need more personal protective equipment for our operators. Some municipalities are looking at things like slash or stab preventing vests. It's something that we need to consider and look at all avenues on how we can mitigate the risk,” he said.

The TTC said its workers are trained on conflict avoidance and de-escalation, including how and when to call Transit Control for emergency support.

“We currently have safety barriers, cameras, radio and non-audio equipment (push-button alerts) on every vehicle to assist in prevention, deterrence and response,” the TTC said.

Di Nino noted that the union is not considering job action in response to the rise in assaults, but that the union would support its members if they choose to do so.

“This is not a strike mandate, and I want to be absolutely clear, but I will say that if our members choose to invoke provisions under the Occupational Health and Safety Act, we will support them on those initiatives.”

Three TTC workers attended the news conference and shared their stories of being a victim in an unprovoked attack.

Anna, who has been a TTC transit operator for 12 years, said she was assaulted while driving a bus overnight on Sheppard Avenue West in 2020.

“The man used the handset, the phone, ripped it right off the console and used that as a weapon to assault me over and over again. Hit my face and my head numerous times,” she said.

Anna suffered a broken orbital bone during the attack, which resulted in facial deformities around her eye.

Daniel, a TTC subway operator, said he was in his uniform riding a subway to work in 2021 when he was attacked.

“All of a sudden I get smashed in the face. I see a bright light. I get pushed to one side. I ended up on my back. This guy's on top of me. He hit me a few times, I don't know how many (times) and I suffered dental damage. I have a severe ankle sprain that physiotherapy has helped me with. I have a torn ACL that this Friday I'm getting surgery for,” he said.

Nicole was also on her way to work in uniform when she was assaulted in 2017.

“I was drinking my coffee like I always do every morning and somebody came from behind, hit me. I lost consciousness for a few seconds and I started bleeding,” she said.

“And to this day, they didn't catch the person. And I'm still here, but I had to move work locations because of it. I'm still suffering from it, I have anxiety because of it.”

A TTC bus transports people in a neighbourhood that Ontario has designated a postal code hotspot during the COVID-19 pandemic in Toronto on Monday, May 3, 2021. THE CANADIAN PRESS/Nathan Denette