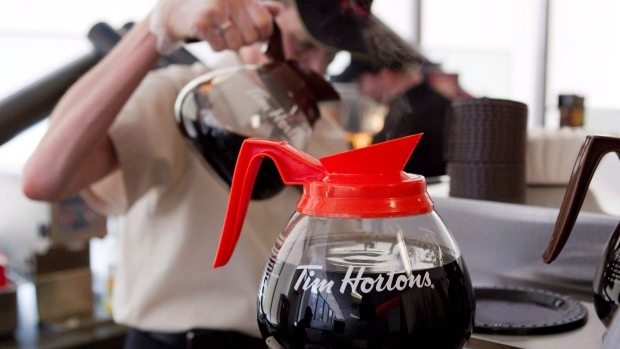 TORONTO -- The premier of Ontario lashed out at the children of Tim Hortons' billionaire co-founders on Thursday for reducing the benefits of their employees in response to the latest minimum wage increase, calling it a "clear act of bullying."

Kathleen Wynne said if Ron Joyce Jr., whose father co-founded the coffee shop chain, was opposed to the Liberal government's decision to raise the minimum wage, he should have picked a fight with her, not the workers.

"I'd be happy if this man were making a statement about the government or about the policy," she said. "What I think is really unfair, and where I think the bullying comes in, is that he's taking this out on his employees. He's behaving in a way that I think is so unfair to his employees, people who are trying to make ends meet."

In a letter sent late last month, Joyce Jr. and his wife, Jeri Horton-Joyce -- daughter of the company's other co-founder, Tim Horton, told employees at two Tim Hortons restaurants they own in Cobourg, Ont., that as of Jan. 1, they would no longer be entitled to paid breaks, and would have to pay at least half of the cost of their dental and health benefits.

Wynne, who faces a tough bid for re-election this spring, has staked her political future on policies like the minimum wage plan.

"When I read the reports about Ron Joyce, Jr., who is a man whose family founded Tim Hortons, the chain was sold for billions of dollars, and when I read how he was treating his employees, it just felt to me like this was a pretty clear act of bullying," she said.

Wynne has talked for months about themes of fairness and opportunity in Ontario's growing economy with the caveat that some workers are being left behind. The premier has said her minimum wage plan, which saw the rate jump from $11.60 an hour to $14 an hour this week, is about helping low income earners. It will increase another dollar to $15 on Jan. 1, 2019.

The plan has angered many in the business community, who say they don't object to the increase itself but the speed with which it is being implemented.

While the changes announced by Joyce Jr. are not a violation of Ontario's Employment Standards Act, Wynne said she wants him to reverse the decision.

"I hope that he understands this is really not a decent thing to be doing in a place as wealthy as Ontario," she said. "I hope he recognizes that his employees need to be treated decently."

In their letter to employees, Joyce Jr. and his wife complained about "lack of assistance and financial help" from Tim Hortons' head office and the government.

"We apologize for these changes," the letter, widely circulated on social media, read. "Once the costs of the future are better known we may bring back some or all of the benefits we have had to remove."

The Great White North Franchisee Association, a group created last year to give voice to the concerns of some Tim Hortons franchisees, said in a statement Thursday evening that the Joyce family are "hard-working small business owners who are striving to keep their business viable and keep all of their employees employed."

The association said Wynne and her government have shown no understanding of small business in Ontario.

The $2.40 an hour increase in the minimum wage is only part of the increase in costs felt by small business owners, the group said.

Increases in other employment-related costs -- such as pension, employment insurance, and vacation pay contributions -- make the total increase to the employer $3.35 an hour, it claimed.

"For one full-time employee at a Tim Hortons location, this would amount to approximately $6,968.26 per annum in increased costs to the owner," it said.

"What the Joyce family have implemented in their two Cobourg stores has been legally done to help them cope with the added business pressures the impact of Bill 148 has placed upon their establishments."