Wynne: Lawsuit against Hudak and MacLeod will be dropped if they apologize 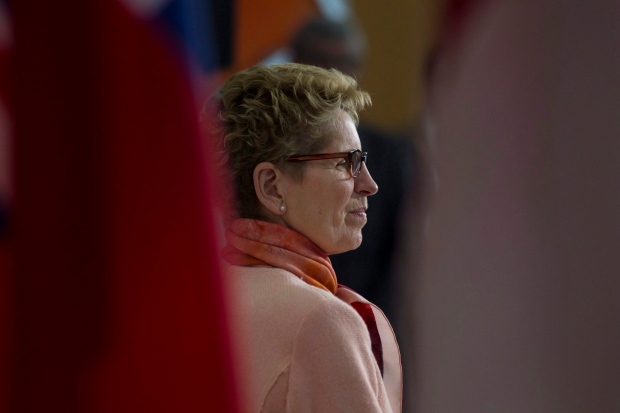 Ontario Premier Kathleen Wynne stands at the podium as the provincial government announces the launch of its new birth certificates in Toronto on Tuesday, March 10, 2015. (The Canadian Press/Chris Young)

Wynne launched the suit last April after Hudak and MacLeod said the premier oversaw and possibly ordered the destruction of documents on cancelled gas plants in Oakville and Mississauga, an act being investigated by the Ontario Provincial Police.

MacLeod said Wynne filed the lawsuit to quash legitimate opposition criticism, and accused the premier of killing legislation the very next day that would have allowed her and Hudak to challenge the suit.

"Did the premier kill the anti-SLAPP bill the day after she launched the lawsuit because it would affect her attempt to muzzle the opposition?" she asked.

The bill to allow people to challenge strategic lawsuits against public participation, so-called SLAPP suits, was reintroduced in December without the retroactive clause in its previous two versions, added MacLeod.

"The premier must know how this looks," she told the legislature. "It appears she killed her own law for her own political gain. She thinks she's above the law, and if the law doesn't suit her, she changes it."

Wynne said the bill was amended in its latest incarnation because courts don't like retroactive changes to laws.

"I think the member opposite knows that retroactive rule-making is not something that is seen favourably by the courts," she said.

Wynne said she filed the suit because the "unfounded and completely untrue" allegations by the Conservatives were just before last year's election, which saw the Liberals easily defeat the Conservatives to win a fourth term in office.

Outside the legislature, MacLeod said she had no intention of apologizing to Wynne for her remarks about the premier's role in the cancelled gas plants, which the auditor general concluded will cost taxpayers more than $1 billion over the next 20 years.

"I did nothing wrong. I did my job and Tim Hudak did his job, voicing our concerns over a particular public policy issue," said MacLeod. "The premier needs to be the one that answers to the public on whether or not she manipulated her own legislation to suit her own political gain."