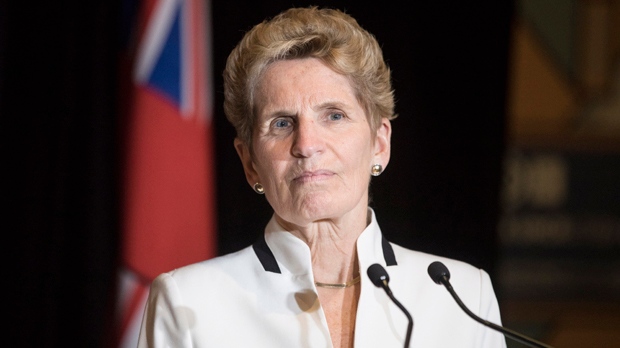 Ontario Premier Kathleen Wynne turns away from the podium in this file photo. THE CANADIAN PRESS/Chris Young

Ontario Premier Kathleen Wynne is looking into how a decision was made to place one of the province's first government-run cannabis stores less than a kilometre from a school, as school board officials say they were left out of the process.

Wynne said Thursday that safety remains her top concern as the province rolls out a chain of stores to sell and distribute recreational marijuana, which is expected to become legal this summer.

The premier said she would ask her staff what led to the selection of the Toronto site.

"I am going to ask a question about exactly how the decision was made," she said. "I just want to know that the school board had input into it."

The province announced the locations of its first four pot stores on Wednesday, saying they'd be set up in Guelph, Kingston, Toronto and Thunder Bay.

The site in east Toronto, however, is close to at least one school, which came as a surprise to the Toronto District School Board.

The board wasn't consulted about the location, said the board's chair, Robin Pilkey.

"If we had been consulted, we would have consulted with parents," she said, noting that some have complained to the local trustee.

"We're kind of surprised, actually," said Pilkey. "We heard nothing about this."

She said the lack of communication is concerning, given that dozens more shops are set to open across the province this year. Once locations are announced it becomes harder to change them, she said.

"To me this is a bit like the Wild West -- they don't know how it's going to run out, so I think caution in the beginning would have been a good idea," she said.

The Ontario Public School Boards Association said the site selection process itself isn't clear and that needs to change.

Ontario was the first province to announce a detailed plan to sell and distribute marijuana after the federal government announced it would legalize recreational pot by this summer.

The province plans to set up a total of roughly 150 standalone cannabis stores by 2020, with the first 40 set to open this year.

The stores will be run by a subsidiary of the Liquor Control Board of Ontario, and the legal age to buy marijuana will be set at 19 -- the same as for alcohol and cigarettes.

The LCBO has said store locations would comply with local zoning rules, minimize proximity to schools and factor in where illegal dispensaries are currently operating.

Ontario Finance Minister Charles Sousa said Thursday there are ongoing discussions with municipalities and other stakeholders about the placement of the stores, but noted that finding appropriate locations is more difficult in cities due to density.

"In certain urban communities it's difficult to have that degree of separation," Sousa said. What's more, he said, "in some of these locations we have illegal dispensaries so we want to combat them."

New Democrat lawmaker Peter Tabuns said there's no indication, however, that the government's plan will help tackle the black market.

"I don't think they're going to have enough outlets to actually provide an alternative to people," he said.