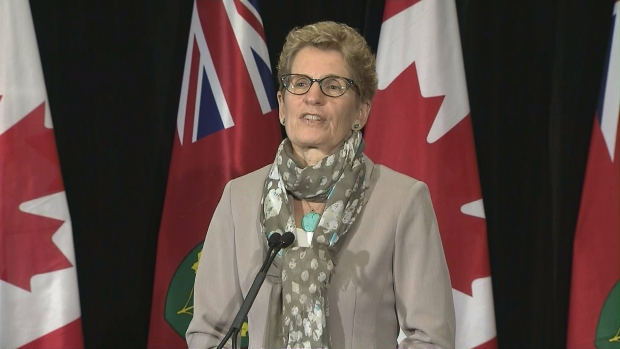 TORONTO -- Ontario's new sex-ed curriculum will be online "within weeks" for parents to see now that the consultation period has finished, Premier Kathleen Wynne said Wednesday.

School council chairs at all 4,000 schools across the province have been consulted and the new curriculum will be implemented in September 2015, she said.

"The health and physical education curriculum is out of date -- in fact it's dangerously out of date," Wynne said.

The premier's comments came in question period Wednesday after Progressive Conservative Monte McNaughton slammed the government, saying more parents, beyond the representatives from each school, should have been consulted.

"It's not Kathleen Wynne's job to tell a parent out there what's age appropriate for their child," he said after question period.

McNaughton said he has been "inundated" with calls, emails and petitions from parents who felt they were left out of the consultation process, but he did not point to any specific criticisms of what is already in the public sphere about the new curriculum

"The complete process has been a farce," he said.

Wynne said she doesn't know if McNaughton's "fearmongering" has more to do with his party leadership bid or "with a very small group of people who want to stir up fear about the reality that kids need information."

The curriculum is complete, now in the process of being translated into French, and what is posted online is what will be taught beginning in September, said Education Minister Liz Sandals.

The Liberal government previously attempted updating the curriculum in 2010 -- the current one dates back to 1998 -- but it backed off after backlash from religious leaders.

Wynne has said students should start learning facial cues as early as Grade 1 to give them the ability to understand the concept of consent.

Sandals said Wednesday that the government heard a "strong consensus" from the parent council chairs that they want their kids to get reliable, accurate and timely information.

"We also had a lot of confirmation that parents want the curriculum updated so their kids are getting accurate information about safe Internet use, that their kids are learning about the dangers of sexting and inappropriate communication on smartphones," Sandals said.

"What we heard from parents is they understood that they can't necessarily control what their kids are seeing and they want their kids to get good, accurate information to counteract that."

NDP Leader Andrea Horwath said since changes to the curriculum were proposed five years ago, it's about time the new version was made public.