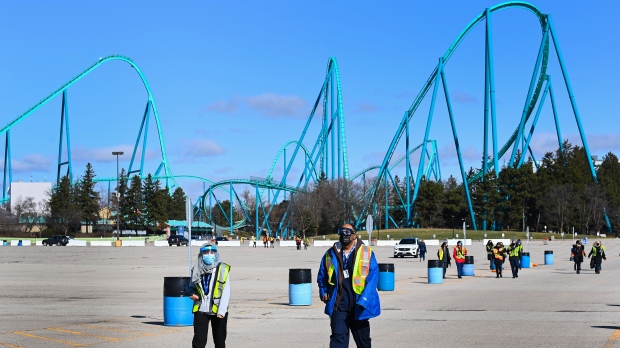 Health-care workers get ready to take patients at a drive-thru COVID-19 mass vaccination site at Canada's Wonderland during the COVID-19 pandemic in Vaughan, Ont., on Monday, March 29, 2021. People don't have to leave their vehicles to get their dose of the vaccine. THE CANADIAN PRESS/Nathan Denette

York Region has now expanded COVID-19 vaccine booking eligibility to those 18 and over who live or work in 16 hot spot communities.

The region made the announcement in a press release Wednesday afternoon and said that all York Region residents who are 50 and over can also now book, as well as some people who cannot work from home as identified in the provincial plan.

While Ontario expanded booking eligibility to all those 18 and up in hot spot communities across the province on Monday, York Region had said it would not yet expand eligibility to that group because of a lack of supply. As late as Tuesday evening, the region reiterated that it needed more vaccines before allowing all those who are eligible to book.

Before Wednesday, the region was only allowing those 35 and up in hot spot communities to book appointments. Those 18 and over in York Region hot spots were only allowed to book through the provincial booking site, which allows bookings at just one vaccination site in York Region.

As of Wednesday afternoon, the region’s vaccine booking portal showed 10 clinics where those 18 and over in hot spot areas can now book, including a drive-thru clinic at Canada’s Wonderland.

It was not immediately clear what prompted the change.

York Region officials had been calling on the province to allocate a greater share of vaccines to York Region, noting high positivity rates. The region even closed several clinics for a day on Monday, citing a lack of supply.

For those who are now able to book, appointments are required and no walk-ins are available.

Those who work in the region need to show a workplace ID at the time of their appointments.

The eligible hot spot postal codes are as follows:

York Region also expanded vaccine eligibility Wednesday to all remaining elementary and secondary school workers in the region, including educators, custodians, bus drivers, and administrative staff. Before Wednesday, only teachers and staff in hot spot postal codes were eligible to get a jab.

Meanwhile, York Region officials said it is unacceptable that several teachers were reportedly turned away at the Ray Twinney immunization clinic on Tuesday.

“Southlake Regional Health Centre must strictly adhere to York Region’s eligibility criteria,” a spokesperson said in a statement to CP24.

“York Region has since reiterated with Southlake the proper eligibility requirements at the clinic.”

The expanded eligibility in York Region comes the same day that Ontario officials said they plan to have offered 65 per cent of adults in the province a first dose by the end of May.

The province also said Wednesday that it will expand mobile vaccination clinics to more workplaces throughout the GTA in the coming weeks, including several in York Region.