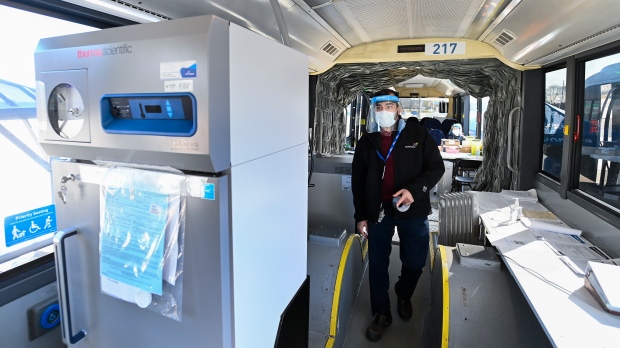 A health-care worker inside the vaccine storage bus makes last minute preparations as they get ready for patients at a drive-thru COVID-19 mass vaccination site at Canada's Wonderland during the COVID-19 pandemic in Vaughan, Ont., on Monday, March 29, 2021. People don't have to leave their vehicles to get thier dose for the vaccine. THE CANADIAN PRESS/Nathan Denette

York Region has moved ahead with second-dose COVID-19 vaccine bookings for those 70 and over almost two weeks ahead of the provincial schedule.

In a statement issued on Wednesday afternoon, the region said that effective immediately any resident turning 70 or older this year can book an earlier second-dose appointment.

Ontario's second dose plan called for those 70 and up to be able to rebook their second-dose appointment through the provincial booking system from June 14 on, but left the timing up to local public health units for clinics with other booking systems.

The move comes amid reports that some parts of the region are seeing a glut of availability in appointments.

Whitchurch-Stouffville Mayor Iain Lovatt told CP24 Wednesday that just 88 appointments were booked out of a possible 550 at one clinic as of early this morning.

He called the low number of bookings “abysmal” and said he will be calling on the region to ask the province to lower the age limit to 65+ for rebooking second-dose appointments.

“This is complete insanity. We will never hit our stage 2 targets with bookings like this,” he said.

At least two vaccine clinics in York Region said earlier Wednesday that they would start taking either second-dose bookings or walk-in appointments for those 70 and up who live in the region on Wednesday.

“We are currently reviewing our eligibility against available appointments,” a York Region spokesperson told CP24.com in an email Wednesday morning.

As of 3 p.m., the region’s booking portal reflected the lower age threshold for rebooking and showed hundreds of available appointments over the next few days.

Those who do not wish to book an appointment sooner can stick to their scheduled second-dose appointments.

“Previously booked second-dose appointments will be honoured and will not be cancelled unless a new and earlier appointment is confirmed,” the region said.

Anyone 12 years of age and older who lives, works or goes to school in York Region is still eligible to book a first-dose appointments if they have not yet had one.

The flood of available appointments comes as Ontario receives its largest vaccine shipments to date. The province is scheduled to receive 939,510 Pfizer doses this week, along with 155,600 Moderna doses.