‘You can’t have ice cream named after God’: Petition demands that Sweet Jesus change its name 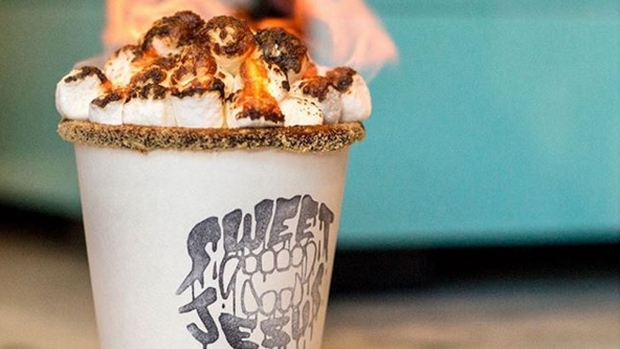 Toronto ice cream chain “Sweet Jesus” appears to have left a sour taste with a Woodstock man who has started a petition calling for the store to change its name.

Sweet Jesus has been around for about three years. The ice cream chain, known for its colourful creations and social media savvy, has gained a quick following in Toronto, with lines that regularly stretch around city blocks.

However the petition posted earlier this month on Citizen GO Canada claims that Sweet Jesus stores “serve up blasphemy.”

The petition, started by Citizen Go Canada Founder David Cooke, calls the use of Jesus’ name in the business “totally offensive and revolting.”

“Even if this were some innocent faux-pas, it would still be unacceptable! However, this is anything but a mere mistake,” the petition states.

It goes on to claim that Sweet Jesus founders Andrew Richmond and Amin Todai “have every intention of mocking Christ and Christianity.”

Cooke says that the name and marketing material of the soft serve ice cream business constitute an open attack on the Christian community and on god.

“When I heard the name, I thought maybe it was kind of lighthearted,” Cooke told CP24.com. “But then when you see the material that they’re presenting, it seems these guys are being very intentional in what they’re doing and that’s just crazy.”

He points to various marketing images he sees as offensive. They include one image where ice cream takes the place of Jesus in a nativity scene; another where an angel is seen bowing down to ice cream; and another with a young girl in a pose of the Madonna.

“It is meant to offend because you can’t have ice cream named after God,” Cooke said.

He also points out some of the ice cream flavours which refer to Christian concepts.

Some of the options at the ice cream store include Hella Nutella, Red Rapture and Sweet Baby Jesus. They sit alongside other non-religiously-themed flavours such as Bounty Killah, Bangin’ Brownie and cookies and cream.

“It is one thing to be counter-cultural, but there’s a time and a place for that,” Cooke said. “When you go across a line and you’re insulting a major figure, the figure of a world religion, and you’re attacking him and those who follow him, it’s just crossing a line.”

While some see blasphemy, the ice cream chain maintains that it is simply making use of a commonly used expression for its business.

“Our name was created from the popular phrase that people use as an expression of enjoyment, surprise or disbelief,” Sweet Jesus says in a statement on its website. “Our aim is not to offer commentary on anyone’s religion or belief systems.

“Our own organization is made up of amazing people that represent a wide range of cultural and religious beliefs.”

Cooke says he can’t force the company to change the name of the store, but he says “the power of the dollar” may hold some sway if all those who signed the petition refuse to eat at the store.

More than 10,000 people have signed the petition so far, according to Citizen Go Canada.

He also points out that he has nothing against ice cream itself.

The store has not announced any plans to change its name.