Youth counsellor who speaks out against gun violence was injured in Hwy. 400 shooting 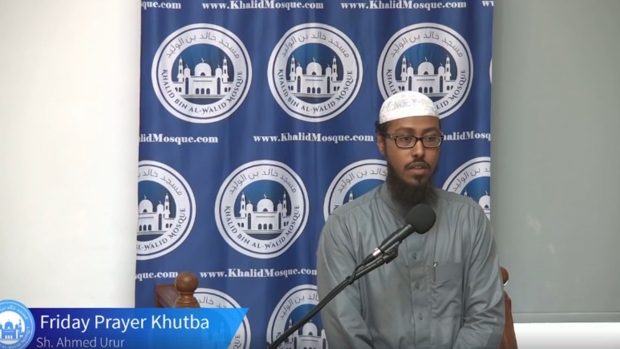 Ahmed Urur is seen speaking during Friday prayers at Khalid Bin Al-Walid mosque in Rexdale in a Facebook video posted in July 2019.

A youth coordinator at a Rexdale mosque who frequently speaks out against gun violence and often attempts to steer youth away from engaging in gun violence was himself injured by gunfire while driving on Highway 400 over the weekend.

Three men were riding in a Honda Civic on Saturday night, heading southbound on Highway 400 near Steeles Avenue West when they were approached by another vehicle.

A suspect inside the other vehicle opened fire, striking one of the men -- 28-year-old Terrence Agtual-- in the head.

Two other occupants of the vehicle, including SK Ahmed Urur of the Khalid Bin Al-Walid Mosque in Rexdale, were struck and injured.

The victims were able to drive to a gas station off the Finch Avenue exit and call police.

Agtual was pronounced dead in hospital on Sunday morning.

Urur serves as a youth coordinator at the mosque and sometimes leads Friday prayers, delivering the Khutbah, or sermon.

He has frequently spoken out about gun violence in Toronto and held a bike rally last month to protest the impact of gun violence on young people.

Police have not identified Urur as a victim of the shooting, but he spoke about the incident in video posted online shortly after being discharged from hospital.

“I thought it was a tire being popped or something,” Urur told dozens of his followers seated with him on Sunday in video posted to Instagram.

“And then he said ‘nah nah, everyone duck’,” Urur recalled someone else in the car saying.

“And then (praise Allah) the shots first started spraying right behind the place where I moved from, literally behind the driver’s seat, and it hit (unknown) in the back.”

Another community leader, Imam Ibrahim Hindy of the Dar-Al Tawheed Islamic Centre in Mississauga, wrote on Facebook that Urur was called to go out that night by Agtual, who told him they both needed to go “and try to counsel a troubled youth.”

Hindy indicated the trio were out getting food when they were shot.

For its part, Khalid Bin Al-Walid mosque issued a statement Sunday saying that Agtual was a “member of our congregation” and adding that another victim is a “teacher and youth leader at our mosque.”

“We grieve for the tragic loss of the young man’s life and offer our sincerest condolences and prayers to the victims and their families.”

“No words can describe the fear, anger, and the sense of despair that our community is experiencing,” the mosque statement read. “We call upon all inter-faith organizations in the City of Toronto and our local and national political leaders to act and confront the scourge of gun violence that has been on the increase at an alarming rate.”

According to publicly available Toronto police statistics, 270 people have been injured or killed by gunfire so far this year in Toronto, up from 211 at this point last year.

Agtual’s death was the 66th homicide in Toronto this year.

Emergency crews were called to Finch Avenue West and Jayzel Drive, west of Weston Road, just before 7 p.m. for reports of a shooting. (CP24)

The victim of Saturday's Highway 400 shooting,Terrence Agtual, is seen in this 2013 Toronto police photo. Police said in a news conference that Agtual has a police record.