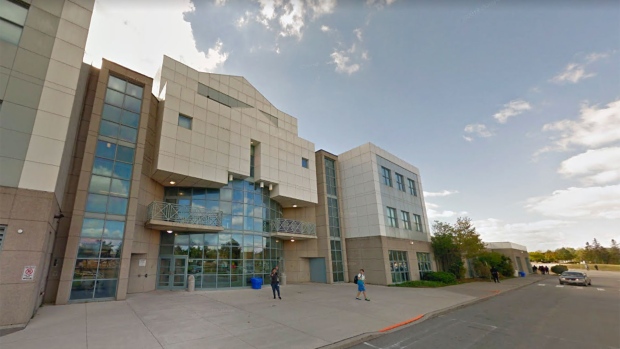 Vaughan Secondary School is pictured in Thornhill. The York Region District School Board has voted to rename the high school. (Google)

The York Region District School Board  (YRDSB) has unanimously voted to rename a Vaughan high school that bears the name of the city’s founder due to his racist past.

In a statement released on Wednesday the school board said that it will move to change the name of Vaughan Secondary School, located on Clark Avenue, just east of Dufferin Street in Thornhill.

“It is important that our education system is responsive to the lived experiences of all of our community members, including students and families of our Black community,” YRDSB Chair Juanita Nathan said in a statement Wednesday. “Students, staff members and families can continue to feel proud of being a part of this school and a school community that centres equity and inclusivity and shows a commitment to anti-Black racism.”

The move follows a renewed debate around whether those institutions and spaces named after individuals with racist pasts should continue to bear their names.

A report by staff at the school board notes that Vaughan Secondary School, which opened in 1989 and now serves a diverse community of around 1,150 students, is named after the City Of Vaughan rather than its founder.

Nonetheless, the report states that renaming the school would be a way for the board to “demonstrate its commitment to racial justice in general and to eliminating anti-Black racism in particular.”

Benjamin Vaughan was a Jamaican-born British parliamentarian who owned slaves and vehemently argued against ending slavery. According to the report, Vaughan also argued that enslavement was “good for Africans.”

The staff report voices concern that Black students’ “sense of belonging and well-being” will be adversely affected by the school’s name on an ongoing basis and says that it is “unthinkable” that they should have to learn in a building “that bears the name of someone who saw their ancestors as uncivilized beings deserving of being chattel or property to be owned.”

“Addressing anti-Black racism is a priority for York Region District School Board,” Director of Education Louise Sirisko said in a statement. “The name of a school should be supported by the local community and provide opportunities for students, parents and community members to be inspired to learn.”

An online petition in June urged the city to change its name. Vaughan City Council has so far resisted that call, opting instead to rename an August civic holiday for former Lieutenant-Governor John Graves Simcoe rather than Benjamin Vaughan.

The report estimates the costs associated with changing the school’s name at about $90,000.

More details about the renaming process are expected to be released at a later date. For now, the school has removed “Vaughan” from signage at the front of the building.