Sun TV reported in the closing days of the federal election campaign that Layton was in a Toronto massage parlour when it was raided by police in 1996.

Layton, who was neither arrested nor charged, called the report a smear campaign.

The information was attributed to police notes taken at the time of the incident and Toronto police asked the provincial police force to investigate.

Police said Thursday that the incident was investigated by Det. Insp. Mike Bickerton who concluded criminal charges would not be laid.

However, a provincial police spokesman says the investigation resulted in a number of police notebooks that were in the possession of a former Toronto officer being returned to the force.

After the Sun TV story broke, a lawyer for the NDP said in a statement that Layton had obtained a massage from a massage therapist, but had no knowledge the therapist's location may have been used for illicit purposes.

Brian Iler's statement added that Layton was told by police he did nothing wrong but that the location was questionable. It said Layton gave police his name and address and nothing further happened. 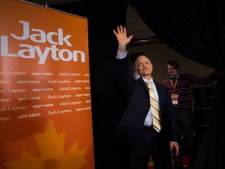 Jack Layton, left, NDP leader and now officially the leader of the opposition, waves to the media after a press conference in Toronto on Tuesday, May 3, 2011. (THE CANADIAN PRESS/Nathan Denette)