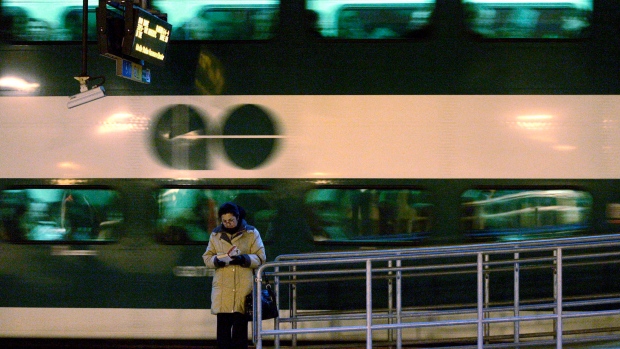 A woman reads a book as a GO commuter train pulls away from the platform at Toronto's Union Station, March 4, 2008. Friday June 24, 2011. THE CANADIAN PRESS/J.P. Moczulski

There will be no train service along the entirety of GO Transit’s Lakeshore East line this weekend as crews continue rehabilitation work on the 117-year-old Rouge River bridge.

Train service on the line will be suspended shortly after 9 p.m. tonight and won’t resume until Monday morning.

During the closure shuttle buses operated by Coach Canada will take customers between Oshawa, Whitby, Ajax, Pickering and Union stations as GO Transit continues to face staffing shortages related to its vaccine mandate.

The shuttle buses will not be stopping at Eglinton, Guildwood and Rouge River Stations and GO Transit is encouraging customers looking to use those stations to consider the TTC as an alternative instead.

“We’ve really worked hard with our transit partners to try to make this weekend’s changes as seamless as possible for customers,” Metrolinx spokesperson Anne Marie Aikins said in a blog post. “While it won’t be ideal for everyone – we really appreciate everyone’s patience as we get this really important work done.”

In addition to the suspension of service along the Lakeshore East line this weekend, there will also be a number of schedule changes affecting service on the Lakeshore West line due to track and signal work taking place between Burlington and West Harbour stations.

Metrolinx says that there will be additional closures “into 2022) as work continues on the overhaul of the Rouge River bridge .