Fire and hydro officials are trying to figure out what caused a transformer station fire that created a massive plume of smoke and shut down Highway 401 for about an hour Friday.

Two transformers burned for hours at Hydro One's Richview Transformer Station on Kelfield Street in Etobicoke until the blaze was finally extinguished at about 8:40 p.m. The fire broke out shortly before 5 p.m.

At the fire's peak, the thick, black smoke formed a massive plume that could be seen from kilometres away as it drifted across Highway 401, resulting in a closure that created a traffic jam.

Residents of Longbourne Drive and Waterbury Drive were forced from their homes because they were in the smoke's path. A condominium complex at 44 Longbourne Dr., near highways 401 and 427, was evacuated.

Toronto Fire Services says the smoke didn't pose a health hazard to the public, and the blaze was fuelled by mineral oil that is used to cool transformers.

About 30 fire units were on scene at the fire's peak. Hydro One dispatched its own emergency teams to the scene.

People who work in the area say at least one explosion occurred as the fire broke out. Lights flickered in buildings across Toronto and some power outages were reported.

Hydro One says Toronto Hydro transferred the electricity load supplied by the transformers to other stations at about 5:40 p.m., restoring power to all affected customers.

The power went out at Pearson International Airport's Terminal 3, but the facility used a generator in the interim. Flights weren't affected by the situation, the GTAA says.

Police closed Highway 401 in both directions between Kipling Avenue and Highway 427 as a precaution because the plume was drifting across the road and it wasn't known if the smoke was toxic. The highway reopened once officials determined the smoke wasn't toxic.

One per cent of electricity lost

The Richview Transformer Station is a 230-kilovolt line distribution centre, which is considered to be one of the larger centres in the Greater Toronto Area.

The station is connected to transmission lines from six other transmission stations in the west end of the GTA, feeding electricity to thousands of homes and businesses.

The Independent Electricity System Operator says Toronto experienced a loss of 32 megawatts of power – or one per cent of the city's electricity – when the power failure occurred. The city usually uses about 3,500 megawatts during peak afternoon times.

There was an immediate reduction in voltage in the west end to compensate for the instant loss of power. That's why many buildings in the west end lost power or experienced power bumps.

The IESO says there is no problem re-routing electricity to other parts of the GTA.

The Richview Transformer Station was undergoing millions of dollars worth of upgrades and capital investments. Hydro One documents show $15 million was to be spent on air blast circuit breakers and another $9 million on transformer replacement in 2011 and 2012.

With a report from CTV's Paul Bliss 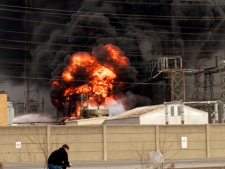 Flames and smoke are seen at the scene of a fire at a Hydro One transformer station Friday, March 18, 2011. (Photo courtesy of Don Cahigas) 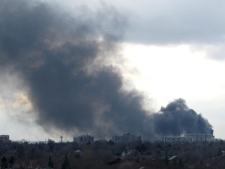 Smoke can be seen billowing in the sky from a transformer fire in Toronto on Friday March 18, 2011. (THE CANADIAN PRESS/ Alan Black) 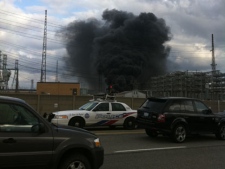