Toronto police are on a manhunt, seeking a suspect who shot and killed a 25-year-old man and wounded six others, including a 13-year-old boy, at the Toronto Eaton Centre Saturday evening.

The shooting happened at around 6:20 p.m. Saturday inside the food court. The food court was packed with shoppers at the time.

Toronto Police Chief Bill Blair said police do have a description of the suspect and will release it to the media once it is confirmed through video evidence and witness interviews. A news conference has been called for 2 p.m.

The 13-year-old boy was fighting for his life in hospital overnight but police say his condition has improved. A man in his 20s and a women also suffered critical injuries from gunshot wounds.

Three other victims -- two women and a man -- suffered non-life threatening injuries and were released from hospital.

A 30-year-old pregnant woman was injured as shoppers rushed out of the mall in an effort to get away from the shooting suspect. Police say she fell and went into labour. As of Sunday morning, she had not given birth.

The deceased man's body remained inside the mall overnight as police continued to inspect the scene for evidence. Officials with the coroner's office were seen entering the mall at around 5 a.m. to prepare for the body's removal. They removed the body at around 7:15 a.m.

For a photos of the aftermath of the shooting, click here.

"The injuries to the man who was killed suggest that he was the targeted victim of this shooting, but there are a number of other people who were clearly innocent bystanders going about their daily lives," Blair told reporters outside the Eaton Centre late Saturday night. "This is a very, very serious crime and the level of violence and wanton disregard for the lives and safety of fellow citizens is shocking to us and should be shocking to the people of Toronto."

He said officers will be "relentless" in their pursuit of the "individual or individuals" responsible for the violence. Investigators have begun to scour dozens of surveillance tapes taken from security cameras at the mall.

"Our first responsibility is to protect the people of Toronto and keep them safe and when acts of violence like this take place in a public space, I think it demands the most immediate and complete response that we are capable of bringing and I am absolutely committed to ensuring that we do that," he said. "We will do everything we can to pursue the people who are responsible for bringing this violence to the City of Toronto."

Blair said all of the bystanders who were shot were in the general vicinity of the targeted victim.

He said most of them, including the 13-year-old boy, were innocent bystanders.

"It rips me apart," he said. "It is a tragedy and it is absolutely terrible. My heart goes out to the families that have been affected by this horrible crime."

Ford was coaching a high school football team when he heard the news. He arrived at the scene shortly after 8 p.m. where he was briefed by Blair and other police officials.

Coun. Kristyn Wong-Tam, who represents the ward the Eaton Centre is located in, is attending a Canadian Federation of Municipalities conference in Saskatchewan and will return to Toronto sometime Sunday.

"I understand the fear, but Torontonians will not and should not run from this tragedy," Wong told CP24 over the phone Sunday morning. "Toronto is a safe city and we will not be intimidated by these senseless actions. We need to double and redouble our efforts to rid our city of gun violence. We will not run from this."

Ford said it was vital that the shooter be placed into custody sooner rather than later.

"We have to aprehend the shooter as quickly as possible," he said. "This person is on the loose right now and we have to get them under arrest."

At the time of the shooting thousands of shoppers were in the mall.

One man, who was shot in the left thigh, described running to safety in an exclusive interview with CP24 as he left the hospital at around 11 p.m.

"I got up and ran and once I got out of the Eaton Centre I called 911," Nicholas said. "I guess my survival instincts just kicked in."

The man, who told CP24 he did not see the shooter, said he is still in shock over what transpired.

"Nothing surprises me, but I'm surprised," he said. "Out in the open like this? Come on!"

Toronto Blue Jay Brett Lawrie tweeted that he was inside at the time and also sprinted to safety.

On Sunday morning he spoke about the tragedy ahead of a game against the Boston Red Sox.

Lawrie, who was leaving the lower level of the mall when the shooting took place, told reporters he feels lucky to be alive.

"We were right down there 10 seconds before and I don't know what could have happened," he said.

Another witness, who identified himself as Ferdinand, told CP24 he heard "seven or eight gun shots" while he was inside a store at the shopping centre.

"The manager said hit the floor, so we hit the floor and five or six minutes after that we were let out through the back door," he said.

"On behalf of all Ontarians, I want to express my condolences to family and friends of everyone involved in tonight's shooting at the Eaton Centre," he said. "Those who were injured are particularly in Ontarians' thoughts and prayers right now as we attempt to make sense of this instance of senseless, tragic violence in the heart of a peaceful city."

In a statement issued Saturday night, Eaton Centre General Manager Susan Allen offered condolences to friends and families of the victims and encouraged anyone with information to contact police.

"Our thoughts are with the victims and their families during this difficult time," she said. "We view this matter with the utmost seriousness and we encourage both our tenants and customers notify police if they have any information. Given that this matter is now under investigation we cannot provide further information.'

The Eaton Centre remained closed Sunday to accommodate the ongoing police investigation, but will reopen Monday. The food court portion of the mall will remain closed until Tuesday.

Toronto Eaton Centre is one of the city's most visited attractions and is a top destination for Torontonians and tourists alike.

The mall is located just steps away from where 15-year-old Jane Creba was shot to death on Boxing Day 2005. Creba was shopping with her sister when she and six others were hit by a hail of bullets fired by rival gangs. Creba, an innocent bystander, was the only one who died from her injuries.

While speaking to reporters Saturday night, Blair harkened to that dark day in Toronto's history. 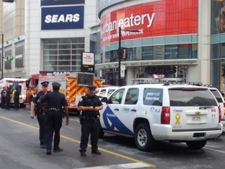 Police investigate after a shooting at the Eaton Centre. (CTV) 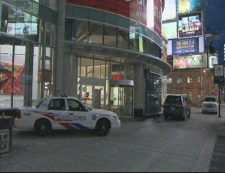 The scene outside the Eaton Centre early Sunday, June 3, 2012. 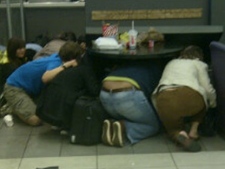 People take cover underneath a table at the food court of the Eaton Centre after shots were fired inside the mall on June 2, 2012. (Twitter) 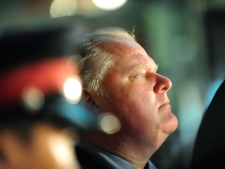 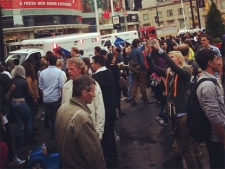 Hundreds of people stand outside the Eaton Centre on June 2, 2012 following a shooting inside the mall. (Twitter) 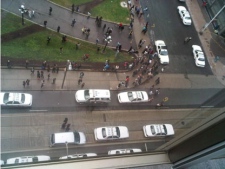 An aerial view of the scene outside the Eaton Centre on June 2, 2012. (Jessica Gorlicky/MyBreakingNews)

Dozens of police cars set up outside the Eaton Centre shopping mall in Toronto, Saturday, June 2, 2012. Shots were fired at Toronto's downtown Eaton's Centre Saturday evening and at least two people were taken out on stretchers, local media outlets were reporting. THE CANADIAN PRESS/John Chidley-Hill