A 43-year-old woman is dead and at least 13 others are injured after a TTC bus rear-ended a flatbed truck carrying a crane on Lawrence Avenue this afternoon.

The accident happened around 2:30 p.m. at Railside Road, near Don Mills Road.

According to Emergency Medical Services, nine people were taken to hospital -- six of those patients were taken to a trauma centre and three to a local hospital. Four people refused to go to a hospital.

EMS also says that three people were transported to hospital with spinal injuries. One child has also been transported but the extent of his injuries is not known.

An EMS major trauma bus was brought to the scene to treat multiple patients.

"Officers are going to have a difficult task in trying to find out what happened prior to this crash, but right now our main concern is with those people that are injured and getting them the help that they need," Const. Wendy Drummond told CP24 during a telephone interview.

Witnesses describe the scene as "chaotic" and say debris is strewn across the road. Images from the scene show paramedics taking several people out of the bus on stretchers.

The driver of the bus was not injured and was seen "visibly shaken" at the crash site.

Lawrence Avenue was shut down in both directions from Victoria Park to Don Mills until 10 p.m.

The 54 Lawrence Avenue bus was put on diversion as a result.

The investigation is now being handled by the Toronto police traffic services unit, who are looking to speak to the driver of a transport truck that may have witnessed the collision.

"It appears that the truck was travelling westbound in the third lane from the centre and the bus was also travelling westbound," Const. Hugh Smith told CP24 at the scene. "Preliminary information shows the bus may have been making a lane change from the third lane to the second lane and collided with the rear of the truck. We'll look at the difference in speed here as well as do a mechanical (inspection) on both vehicles."

TTC spokesperson Danny Nicholson told CP24 that TTC officials are on the scene and cooperating with the investigation. The TTC will also conduct a investigation of its own into the accident.

If you have any pictures or video of this accident, please submit them to MyBreakingNews. 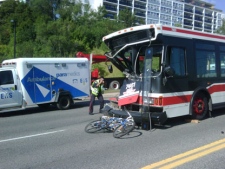 One person was killed and 11 others were injured after this bus crashed on Lawrence Avenue at Railside on Tuesday, Aug. 30, 2011. (CP24) 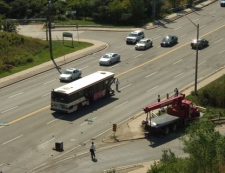 Nearly a dozen person were injured after this bus crashed on Lawrence Avenue at Railside on Tuesday, Aug. 30, 2011. 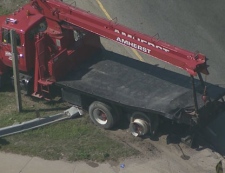