Bargainers for the province's 24 colleges say their offer would pay union members 1.5 per cent more for the first two years and 1.75 per cent in the third year of the proposed contract, which doesn't ask for concessions.

The Ontario Public Service Employees Union, which represents roughly 8,000 support staff, has been seeking a three per cent annual wage increase and job protection against the schools' use of part-time and temporary hires.

The colleges say their proposed contract won't result in two-tier compensation packages for new employees -- another concern of the union.

Union members voted last month in favour of giving negotiators the option to call a strike. That means support staffers, who fill many non-teaching roles, could strike after the current contract expires Aug. 31.

Labour action could put the coming school year in jeopardy and a student group has called for schools to do whatever it takes to stay open. Three final days of bargaining are scheduled to start Monday.

The colleges' offer "reflects the realities of the current constrained economic environment and is in line with the pattern of recent settlements within the broader public sector," bargaining chair Gerry Barker said in a statement.

The 1.5 per cent increase in the first year would be a lump sum payment under the contract proposal while the remaining two years would be base salary increases. 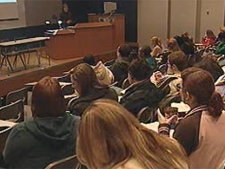 Classes could be disrupted at Ontario's 24 colleges if a strike occurs Sept. 1.