Ont. gets record $2B from lottery agency

TORONTO - Ontario's lottery agency is paying out $2 billion in cash to the province after a year of record-breaking revenue.

The dividend payment, which is worth almost 10 per cent of the province's budget deficit, will help fund hospitals, schools and other public initiatives like amateur sports, the Ontario Lottery and Gaming Corp. said Friday.

The $2-billion payout -- the biggest since 2003 -- is drawn from the $6.7 billion in total revenue the OLG earned for the fiscal year ending March 31.

OLG president Rod Phillips said the efforts of employees and executives to maximize agency profits are behind the banner year.

Paul Godfrey, who was appointed chairman of the organization following the spending scandal, said the OLG's stellar earnings are partly due to restored public trust in the agency, which now posts executives' travel and hospitality expenses online.

"We've tried to prove to the public in many ways that the integrity of the OLG is solid as a rock," he said.

OLG staff are also getting their share of the revenue boon.

The agency's 6,000 employees will make an average of just under $2,000 each in performance-based compensation on top of their base salary, Godfrey said.

That means $11.6 million was spent last year on topping up staff paycheques even though salaries were frozen under a government belt-tightening drive.

The compensation scheme was negotiated with employees and can't be changed retroactively, Godfrey said.

"If somebody had a problem with that they should have told us at the beginning of the year, not the end of the year," he added.

Phillips said there's no doubt the provincial economy is still going through "difficult times," but that the OLG dividend helps take pressure off taxpayers' wallets.

The agency is looking to launch an online casino next year to cash in on the popularity of foreign gambling websites, which are illegal in Canada but rake in an estimated $400 million in bets each year in the province.

The website won't be given the green light until the OLG is "comfortable" that they can guarantee gamblers' privacy, he said.

NDP critic Peter Kormos said the agency needs to provide more details on how it makes its money before it gives people more ways to gamble.

An OLG financial statement given to Queen's Park annually doesn't break down how much each of its lottery, casino and sports-betting products brings in, Kormos said.

"It's clear that these revenues aren't based on high-roller casino players," but instead come from less well-off players who make small bets on cheaper products like $2 and $5 lottery games, which have the poorest payout odds, he said. 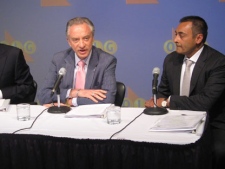