Electricity rates in Ontario are going up again May 1, but the Liberal government said Tuesday that most consumers shouldn't notice any big increases in their hydro bills this summer.

The Ontario Energy Board, which sets electricity rates twice yearly for homes and small businesses, said those on time-of-use pricing would see rates jump .08 cents a kilowatt hour for all time periods. At the same time, the lowest off-peak rate will start at 7 p.m. weekday evenings instead of 9 p.m.

The energy board estimated the average household on time-of-use pricing would see its electricity bill jump less than $4 per month.

The board said people on the tiered pricing scheme can expect a $6.12 increase in their monthly bill starting in May. In winter months, the threshold before the higher price kicks in is 1,000 kWh, which the board says accounts for about $2 of the monthly increase in summer.

The Liberal government said the 10 per cent rebate on energy bills that kicked in Jan. 1 means the amount consumers pay this May will be very similar to hydro bills from last May.

"We're pleased our clean energy benefit is having the desired effect, which is making sure that Ontario families' bills are kept at a pretty flat line compared to last year," said Energy Minister Brad Duguid.

"I think that's good news for consumers when they're seeing year over year the rate increase is less than one per cent."

The Opposition said the 10 per cent rebate is "cold comfort" when it's being eaten up by price hikes.

"I don't think you're going to find too many people rejoicing about the 10 per cent rebate when they hear the news today that rates are up again," said Progressive Conservative critic John Yakabuski.

"It's typical of the way Liberals try to spin the message, but the reality is electricity prices continue to skyrocket under Dalton McGuinty."

The New Democrats too said the 10 per cent rebates weren't really helping consumers.

"Their temporary rebate scheme puts money in with one hand and takes it out with the other," said NDP Leader Andrea Horwath.

"It's the government's temporary way of trying to tell people they're sympathetic to the issues, but we know very well that this government has done nothing at all to deal with the affordability crisis people face."

The Liberal government has already warned electricity rates in Ontario will jump 46 per cent over five years to pay for green energy projects and for badly needed upgrades to the system.

Earlier Tuesday, four Greenpeace Canada activists were arrested after occupying the energy minister's offices for a few hours to protest the province's plans to build new nuclear reactors instead of getting more power from renewable sources.

Ontario is already aggressively pushing for more green energy production, but will never get around the fact that nuclear power supplies about 50 per cent of the province's base load, said Duguid.

"I think you'd be pretty hard-pressed to find another jurisdiction anywhere in the world building more clean energy than here in Ontario," he said. "But we need a healthy mix, and nuclear energy, for the foreseeable future, will need to be part of that mix if we're going to ensure that we have a reliable and modern energy system." 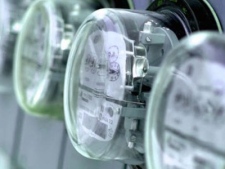