TORONTO - A new government-funded study suggests Ontario families have not been hit as hard as expected by the harmonized sales tax.

The study -- commissioned by the province's Ministry of Finance -- says businesses are passing on the savings they receive from input tax credits to consumers.

The report by University of Toronto professor Michael Smart cost the ministry $24,000.

"It was really important to make sure we had a snapshot of what the first six months looked like with the HST implementation," said Minister of Revenue Sophia Aggelonitis.

The peer-reviewed study, which was released by the University of Calgary on Thursday, was conducted by an independent third party, Aggelonitis said.

The Progressive Conservatives say the study is a "desperate" attempt by the Liberals to regain voter confidence ahead of the Oct. 6 election.

Tory critic Peter Shurman says the Liberals commissioned the study to "beat the drum on what a terrific thing the HST is."

"The bottom line on the HST is no study and no statistic will ever tell us what we learn when we're on the ground talking to people," said Shurman. "And people in Ontario would argue with this ... They're flat out broke."

Aggelonitis says the purpose of the report was not to sway voters to re-elect Premier Dalton McGuinty, but to inform Ontario residents of the changes that have occurred since the HST was implemented.

"We've introduced a very large, comprehensive tax change," she said. "So it's really important to communicate those changes to the people of Ontario."

Aggelonitis added that the government has been regularly publishing information about the HST and will continue to do so.

The report finds that consumer prices rose 0.9 per cent in July as a result of the HST. But the study says the hike has since decreased, with prices only up 0.6 per cent in December.

The findings of the study surpassed the government's estimates of how much in savings is being passed along to consumers, Aggelonitis said.

Input tax credits are passed on as lower prices or higher wages gradually, so the effect of the HST on families will continue to improve, according to the study.

In September 2009, the bank estimated that 80 per cent of the cost savings would be passed on to households in the first year, versus the government's conservative estimate of 20 per cent.

"Given the competitive nature of the Ontario economy and its high openness to trade, businesses would feel the need to pass savings on to consumers even before they realize them," Petramala said.

Petramala dismissed Shurman's allegation that the funding received from the Ministry of Finance made the study "suspect."

"Michael Smart has a reputation, so he's only going to endorse research that he truly believes in," Petramala said. "He is a leading expert in this area." 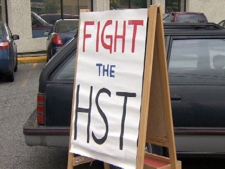