Ontario will be hit with 'sweltering heat' this summer, Farmers' Almanac forecast says 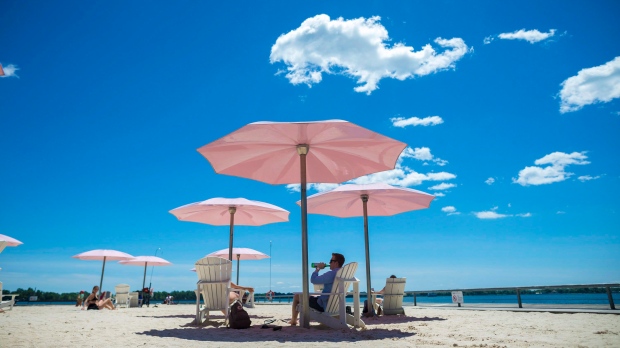 People enjoy the warm weather while protecting themselves from the sun with the pink umbrellas at Sugar Beach, in Toronto on Friday, July 6, 2018. (THE CANADIAN PRESS/Tijana Martin)

The Farmer's Almanac forecast for Ontario's summer is now out and it's predicting the province will be hit with sweltering heat.

According to the forecast, Ontario will also see many summer days that are "showery and thundery."

According to the forecast, Ontario's summer heat will also arrive later than normal, and this year’s peak temperatures could come late August into early September.

Geiger said that despite having lots of thunderstorms in the forecast, that doesn’t mean it will be overly rainy.

"Thunderstorms doesn't mean all day rain, it just means thunderstorms … It's one of those deals where people will be outdoors but you'll have to watch the sky."

He said the forecast shows stretches of pleasant weather, where there will plenty of sunshine to enjoy.

The forecast predicts most of Canada will see more showers than normal this summer, except for British Columbia, which is expected to be "warmer" and "drier than normal."

Geiger and his team create their forecasts using a formula that’s over 200 years old.

He said the forecasts can’t be "100 per cent accurate" but the formula will help give people a gist of what the upcoming season will look like.