MILTON - An Ontario woman who shaved her head and eyebrows to convince people she had cancer and then pocketed the donations they made to her bogus charity will not go to jail for the scam.

Ashley Kirilow, 23, said little in court as she was given a 15-month conditional sentence with 10 months to be served under house arrest and five months under curfew.

Kirilow also must complete 100 hours of community service but is not allowed to volunteer for any charity.

In handing down his sentence on Thursday, the judge also ordered her to attend counselling and take medication for mental health conditions.

The young woman is currently living in a psychiatric ward at Joseph Brant Hospital in her hometown of Burlington, Ont., and is under the care of a psychiatrist who has diagnosed her with anxiety, depression, and a personality disorder.

The allegations against Kirilow ignited a palpable rage when they surfaced last summer. Searing comments were splashed across the Facebook page set up for Kirilow's fake charity, Change for a Cure, with some people even writing that they hoped she got cancer.

Both the Crown and the defence took more than an hour to argue reasons behind their recommendation for no jail time, citing Kirilow's mental state, and her increasing need to seek attention after a troubled upbringing where she was shuffled between the homes of her separated parents and her grandparents for years.

Despite the public outcry that vilified Kirilow, Justice Fred Forsythe told the court that he had to balance the public's need for justice with Kirilow's mitigating factors.

The sentence is "not an instrument for the acting of public vengeance and retribution," Forsythe told the court.

The emphasis is on "rehabilitation of the offender which obviously benefits both the offender and society," he added.

He also took into account that she is at a low risk of reoffending, and is currently under treatment.

Kirilow -- dressed in a black sweater and blue jeans -- had no supporters in the courtroom on Thursday. She spoke in a barely audible voice when asked questions, and didn't turn around to look at the crowd of reporters gathered in the courtroom.

She had become estranged from her family and lawyers argued that Kirilow pulled off the whole stunt as a cry for attention, which later snowballed out of control.

"I would have been bowled over if they appeared today," said her lawyer Brendan Neil said of Kirilow's family.

He quoted her psychiatrist as saying that living with her family as part of her sentence would be a "recipe for disaster."

Justice Forsythe said he believed Kirilow can be rehabilitated.

"I sincerely hope on behalf of society that with the assistance of doctors and your own efforts that you'll get on with your life and have many many years of happiness...and become a productive member of our society," he said.

She said nothing as she left the courtroom wearing large sunglasses and a grey wool hat that covered most of her face.

Neil said none of Kirilow's victims wanted to provide a victim impact statement, and Neil said Kirilow declined to make a statement because she suffers from anxiety.

Shortly after she turned herself in to police last August, Kirilow's parents tearfully spoke out, saying they'd tried to help her for years. Her father, Mike Kirilow, has said he won't support his daughter. Her mother, Cindy Edwards, said she wants "nothing to do with her."

The court heard that Kirilow's parents were teenagers when she was born, and later split, shuffling their daughter from home to home, leaving her without a stable upbringing.

Kirilow, who was facing a maximum of 10 years in prison, admitted last year that she defrauded one woman of $7,400 at a fundraiser and even shaved her head and eyebrows and plucked her eyelashes to appear sick.

Court heard Thursday that Kirilow took about $12,000 but because it was mostly cash the actual amount will never be known.

She was not ordered to pay back the money because she is living in the psychiatric ward and doesn't have a job.

"Is it proper -- and it's not -- under the law, to set someone up essentially for failure on a condition to pay restitution," he added.

Neil said she has aspirations to go to school and get a job where she can help people.

One theme both the lawyers and judge mentioned was that they hope Kirilow's scam won't deter Canadians from donating to legitimate charities.

"Check for credentials at the door. I will," Forsythe said.

Kirilow was the second case of a young Ontario woman who faked cancer to defraud people of money. In December, Jessica Ann Leeder was sentenced to six months house arrest.

She admitted she took more than $5,000 from co-workers in Timmins after pretending to have lung and stomach cancer for close to a year. 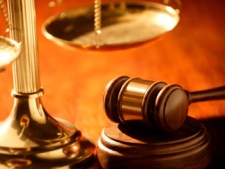