TIMMINS, Ont. - A 21-year-old woman who faked cancer to defraud people in northern Ontario was handed six months of house arrest Tuesday, with special provisions made after she told court she's pregnant.

Jessica Ann Leeder admitted in court last month that she defrauded co-workers at a Ford dealership of more than $5,000. She pretended to have lung and stomach cancer for close to a year, while accepting support, including money, from the community.

Although Leeder faced a maximum sentence of 14 years in prison, the Crown indicated before Tuesday's sentencing hearing that Leeder would not face significant jail time.

The case made waves in this northern Ontario city, with some people last month saying they couldn't believe a local woman was charged in a cancer scam so soon after Ashley Kirilow of Burlington, Ont., pleaded guilty to a similar, but unrelated, ruse.

And just weeks after that, Toronto police charged a man with fraud after he allegedly pretended to have terminal brain cancer.

"I'm very sorry for the actions I've done and I want the chance to make things right," Leeder, who had pleaded guilty to fraud over $5,000, told Judge Martin Lambert on Tuesday.

Leeder told the court she is pregnant -- the Crown said it could not verify that claim -- and the sentence was tailored to the medical needs of an expectant mother.

For the first three months Leeder is under 24-hour house arrest and can only leave the home for medical emergencies, except for Saturdays when she can leave from 9 a.m. to midnight for personal business.

The three months that follow that will see Leeder under house arrest from 6 p.m. to 8 a.m. That will be followed by a year's probation, including 100 hours of community service and a prohibition on alcohol.

Violating those conditions could lead to jail time for Leeder.

The court also recommended Leeder do her community service with the Canadian Cancer Society.

In the case of the other young woman, Kirilow pleaded guilty on Nov. 2 to fraud over $5,000.

The 23-year-old still faces six counts of fraud under $5,000, which each carry a maximum term of two years. The Crown said Kirilow's motivation was to attract attention.

The criminal allegations against Kirilow ignited a palpable rage. Searing comments were splashed across the Facebook page set up for her fake charity, Change for a Cure, with some even saying they hoped she got cancer.

In the case of the man who allegedly faked brain cancer, police say Christopher Gordon, 29, first made that claim in October 2009 and that his friends then organized a fundraiser and collected $3,000.

Police say Gordon spent the money, then confessed to family and friends this month that he did not have brain cancer.

His case is before the courts. 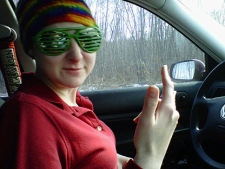 Jessica Ann Leeder is shown in an undated handout photo. An Ontario family who supported a young woman accused of faking cancer and collecting money for treatments says they are devastated. Leeder, 21, is charged with fraud over $5,000 and was scheduled to appear in Timmins court on Monday.(THE CANADIAN PRESS/HO)