This time though, the roguish actor looks south of the border for his latest leading man -- the archetypal U.S. gunslinger in the camp western, "Gunless." With a twist, of course.

"Which is the only way that you can really make a western outside of the U.S.," Gross says of his turn as the cocksure Montana Kid.

"If you're doing it in Canada, you have to do that. How can you do a western in France? it doesn't make any sense. And it makes about as much sense to us because it's a mythology that we don't have."

Gross's gun-toting outlaw takes refuge in a peaceful Canadian town while on the run from a blundering posse south of the border.

It's soon clear that things are done differently in the dusty north -- the saloon bartender greets the bewildered yank in French and his first friend is a Chinese girl, whose family is building the railroad.

None of this stops the Kid from picking a fight with the local blacksmith and challenging him to a showdown. But the duel is delayed when he discovers no one in town has a pistol and it'll take two weeks to order one in.

Writer/director Bill Phillips says he wanted to play off iconic western conventions and put a Canadian spin on them.

"That was part of the game that we were playing with 'Gunless' " says Phillips. "(They're) just elements that, at a glance, people are familiar with and they go, 'Ah, that's a western.' And then you take them and take their comfort level with them and you just twist it a little bit."

Still, it's the ubiquitous nature of those well-worn conventions that threatened to scuttle Phillips' plans early on. Phillips recalls the deflated reactions he'd meet whenever he pitched his idea to potential investors: "Oh. A Western," he says, mimicking their disapproval.

"As if that genre is dead or something," continues Phillips, who shot in the desert landscape near Osoyoos, B.C., where temperatures soared into the 40s.

"Which it isn't, it keeps coming back all the time."

The period piece required Gross to don three layers of wool, a big hat and stringy hair extensions for the sweltering shoot under the Okanagan sun.

"Which is unbelievably irritating," Gross says of his dark fake locks. "I don't know how women do it. It's in your mouth, it's in your food, it's crazy."

Phillips makes no bones about aiming for as broad an audience as possible with his light-hearted take on a time-honoured genre.

"I do believe that you want to make films that people see," says Phillips, who helmed the 2003 Canadian box office flop, "Foolproof."

"But I think what happens is then the industry grabs onto this notion of 'Yes! Commercialism. We have to make these commercial,' and then you start pandering. . . .

"At the end of the day, we're never . . . going to be able to overtake Hollywood, like nobody in the world is able to do that. So, I think the only way you're going to have your work rise to the top is in quality and not pretending we can play the games as a junior player at their level."

Gross says the Canadian film industry has long been hampered by the notion that chasing a big audience is incompatible with quality filmmaking.

"We make a lot of movies that nobody in their right mind would be interested in going to see, so why do we make them?" says Gross, whose $20-million war film "Passchendaele" was Canada's leading box office draw in 2008.

"Why, just because a film is popular does it necessarily lack any integrity? It's insanity to think that way. Or a film that nobody's interested in watching must necessarily therefore have great integrity? This is retarded. We need to flip this around." 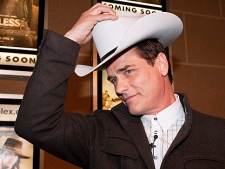 Actor Paul Gross, puts on the White Hat he was presented with by Calgary Mayor Dave Bronconnier, before the premiere of Gross' move "Gunless" in Calgary, Tuesday, April 20, 2010. Gunless opens in theatres April 30.(THE CANADIAN PRESS/Jeff McIntosh)