The man was an employee of Swissport International Ltd., an air cargo service.

Peel EMS officials said the man suffered chest injuries when he came into contact with a piece of equipment. There are reports the man may have been caught between a baggage loader and a plane.

Police said the man was pronounced dead at a trauma centre in Toronto. His name has not been released.

The Ministry of Labour is investigating. 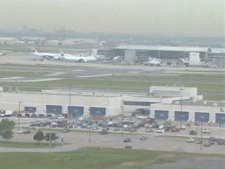