TORONTO - Toronto police are asking people to turn in any pictures or videos they have of violent acts during the G20 summit.

Det.-Sgt. Gary Giroux says they are interested in images that show people assaulting officers, damaging police cruisers or damaging buildings and other property.

Giroux told a news conference today he has "extremely aggressive officers" assigned to the investigation.

He says those responsible for criminal acts will be prosecuted to the full extent of the law.

Giroux says people have been dropping off pictures and videos at police stations, and police would like that to continue.

People can also upload pictures and video to the Toronto police website. 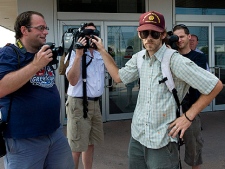 A supporter of the accused ringleaders of the G20 riots confronts media outside an Ontario Court of Justice in Toronto on Tuesday, July 6, 2010. (THE CANADIAN PRESS/Adrien Veczan)