The northbound lanes on Highway 410 will remain closed between Steeles and Clarke until at least midnight, following a single vehicle accident.

Ontario Provincial Police say a vehicle was travelling northbound shortly after 8 p.m. when it left the shoulder of the road and struck a guard rail.

The 20-year-old male driver was subsequently ejected from the vehicle.

He has been taken to hospital with life-threatening injuries.

A 14-year-old boy has been airlifted to hospital with serious but non life-threatening injuries after he was hit by a vehicle on Highway 48.

The accident happened shortly after 6 p.m.

Police say the boy was crossing the highway near Ravenhurst Road when he was struck.

Highway 48 was closed for several hours as police investigated, but reopened at 8:30 p.m.

Six people are facing a laundry list of charges after officers from the Toronto Drug Squad Enforcement Unit executed a number of search warrants in the Woodbine and Danforth Avenue area.

Police simultaneously raided six homes and two businesses around 7 p.m. Thursday, seizing a quantity of Cocaine and Oxcotin, $86,000 in cash and a BMW.

The warrants were executed at Suzanna's Café and Double Shot Espresso Bar on Danforth Avenue as well as four nearby homes on either Danforth or Gledhill Avenue.

Patricia May, 49, Jordan Mel Morrow, 20, Shane Morrow, 24, Frank Salonia, 39, Antonio Villacci, 44 and Antonio Gallo, 49, are facing a total of 37 drug related charges. They were scheduled to appear in court Friday.

A message circulating about the abduction of a three-year-old girl on Twitter Friday is a hoax, Toronto police said.

According to the tweet, a three-year-old girl had been picked up by a man driving a grey car, with the Quebec licence plate 72B 381.

Traffic services confirmed that the message was a hoax via Twitter.

Both vehicles went into the ditch, with one rolling over.

One lane of the highway is currently closed.

Police expect to have the scene cleared quickly.

Two elderly people have been injured following a collision involving a transport truck and car in the city's north end Friday morning.

The collision happened in the Leslie Street and Steeles Avenue East area when the car was struck while turning in front of the truck, police said.

Initial reports said that the car has sustained heavy damage.

One woman has been transported to hospital with chest injuries. 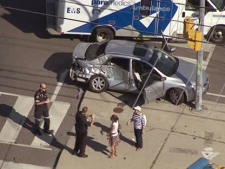 The scene of a serious collision between a transport truck and a car at Leslie Street and Steeles Avenue in Toronto on Friday, Aug. 12, 2011.