BARRIE, Ont. -- The nearly month-long search for a teen who went missing after arguing with his parents over a video game ended in apparent tragedy Wednesday just as Brandon Crisp's mother placed her hopes on a new billboard campaign to bring her son home.

A body "believed" to be that of Crisp was found Wednesday morning in a rural area within kilometres of his central Ontario home, said police, who added foul play was not suspected.

The 15-year-old's disappearance on Thanksgiving Day, Oct. 13, prompted an outpouring of emotion and support from across the country, with hundreds volunteering to assist in the search.

Crisp ran away from home when his parents took away his Xbox console because of what they said was his addiction to the online game "Call of Duty 4: Modern Warfare."

Charmaine Nolan, who works with the teen's mother and organized the public search for him, said she is "devastated" for the family.

"We've just been beside ourselves dealing with this unfortunate outcome," she said of herself and the other searchers.

"We just had a lot of hope and a lot of promise that we were going to get Brandon back safe and sound, so it was a very difficult day for us."

"We were just excited this morning because, through our company, we had organized a series of billboards that we were getting set up and getting ready for printing to post Brandon's missing poster," Nolan said.

While police were still in the early stages of the investigation the body was believed to be Crisp, said Barrie police Sgt. Dave Goodbrand.

"It's believed at this time it is Brandon Crisp, however there is other medical examination and further investigative work that has to be conducted before we can make that determination 100 per cent," he said.

"We're definitely all moved by this and the case has drawn national attention and we've done everything we can to locate Brandon and obviously a very tragic day."

Investigators have been in touch with the teen's parents, Goodbrand added.

"They're obviously distraught by the information," he said.

"Our thoughts and prayers are with the family right now."

Provincial police Const. George Silvestri said the discovery of the body did not present a safety concern for the community.

"Our indication is, at this time, no foul play suspected, but of course we have to examine every possibility," Silvestri said.

The body has been taken to Toronto where a post mortem examination will take place, Silvestri said after provincial police took over the investigation.

Throughout their ordeal, Crisp's parents had held out hope that their son would safely return home, even changing their answering machine message in the event the boy tried to call home.

The message was still on the Crisp family's answering machine Wednesday, urging the boy to call 911 and say he was OK in case he wasn't in a position to leave a message.

"We love you dearly," the father says in the recorded message.

"We want you home; we just need to know you're safe."

Staff and about 1,100 students at St. Joseph's High School, where Crisp was a pupil, held a communal prayer in the school gymnasium after learning the news.

Police first delivered the grim news to the school's principal, who then informed teachers and students.

Legg said students were given the option of going home early or remaining in class, and grief counsellors were to be made available.

The railing outside the school entrance was still adorned with yellow ribbons Wednesday afternoon, and a sign on the grounds read: "Crisp family in our thoughts and prayers."

Outside the school chapel, candles, flowers and condolence book were laid out on a table alongside a photograph of the boy.

"It was a very, very difficult afternoon. That comes like a real blow after waiting this amount of time," said Matt McCann, the school's principal.

"We've been promoting that whole hope idea. It's been very difficult."

Police had said that a woman saw Crisp on two occasions along a trail several kilometres from his home on the night he disappeared, and she noted the boy appeared to be having trouble with his bike.

The teen's abandoned mountain bike was found in the area Oct. 20.

As the weather grew colder and snow began falling, police began a massive aerial, marine and ground search effort on Oct. 19 in the Shanty Bay area -- about four kilometres from Crisp's home -- near where the body was found Wednesday. About 1,500 volunteers also aided in the search, but no trace of the boy was found at the time.

Police had received more than 1,000 tips, but failed to find any meaningful clues to Crisp's whereabouts.

Two local media companies, including the Barrie Advance, where the boy's mother works, had put up some $20,000 in reward money for information to help locate the teen. Software giant Microsoft, which manufactures the Xbox, later boosted that amount to $50,000.

Crisp's disappearance prompted a huge outpouring of support from across the country.

A Facebook group with nearly 22,000 members was created, and within a half-hour of the news of the discovery of the body, there were already 100 condolence messages. 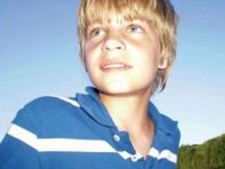 Brandon Crisp, 15, is seen in this undated police handout photo.