Toronto police moved in Thursday morning to evict a handful of Occupy protesters who had been camped outside of the University Avenue courthouse.

About two dozen police officers showed up at about 6:30 a.m. and asked the protesters to vacate the property.

The protesters left peacefully, allowing a crew to throw out belongings that were left behind, including signs, papers, a mattress and chair.

Members of the crew wore protective suits and masks as they filled several garbage bags.

Using chalk, someone previously scrawled the message "Enter at your own risk police may beat you" on a concrete wall.

Last week, police took a group of Occupy Toronto protesters into custody and charged at least two people during a confrontation outside Osgoode Hall.

Ontario's Special Investigations Unit is probing last week's arrests because of various injuries suffered by a woman who was taken into custody and charged by police. 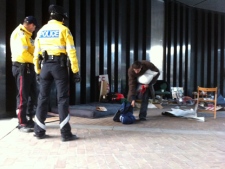 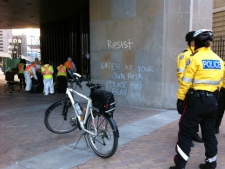