Toronto police say the city's latest murder was caught on camera by a video surveillance system.

Investigators have released a portion of the footage to solicit tips from the public to solve the slaying of 21-year-old Gregory Taylor.

Taylor was gunned down outside a west end apartment building near Black Creek and Trethewey drives on Friday at about 2:30 a.m.

Police believe Taylor was lured outside because the surveillance footage shows him approaching a car, then turning and attempting to run away.

Taylor was shot during the confrontation and died a short time later as his brother attempted to drive him to a hospital. Police found Taylor in the back of his brother's car.

No one has been arrested.

In March 2009, Taylor had been accused in an assault, extortion and kidnapping case in Toronto, but was later acquitted of all the charges.

Police say they'll be reviewing that file to see if it gives them any clues. 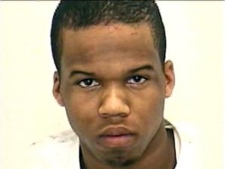 Gregory Taylor, 21, was fatally shot outside a west end apartment building near Black Creek and Trethewey drives on Friday, Feb. 11, 2011.