A university student identified as the victim of a gruesome killing and dismemberment was described Friday by his boss as a model employee who never missed a shift -- until his sudden disappearance last week.

Jun Lin was a responsible, polite cashier who was friendly with customers in a tough Montreal neighbourhood, said the owner of a convenience store.

Kankan Huang said that's why he knew something was amiss when the part-time clerk -- his only employee -- didn't show up for work last Friday.

Huang said Lin, 33, worked a shift at his corner store the day before he vanished. It was also the last time he saw him.

Magnotta is also suspected of videotaping himself stabbing and dismembering Lin. The film was later uploaded onto the Internet.

A torso was found earlier this week inside a suitcase that had been left out for garbage collection behind Magnotta's Montreal apartment building. The same day, authorities found a hand and a foot that had been mailed to political offices in Ottawa.

That appears to behind Magnotta being charged with criminal harassment against Prime Minister Stephen Harper and members of Parliament.

Montreal police issued a Canada-wide arrest warrant for Magnotta, who has since been added to Interpol's wanted persons list. He is also wanted for first-degree murder, defiling a corpse and using the mail system for delivering "obscene, indecent, immoral or scurrilous" material.

Magnotta has since disappeared and his apartment was found stained with blood. Police believe he may have fled to Europe.

The visibly shaken Huang learned about Lin's fate while reading the news on Friday shortly after police identified him as the slain man.

But he still wasn't ready to accept that his employee was the victim of a disturbing crime making headlines around the world.

"I'm just shocked and I don't know if it is true, but I hope it's not," Huang told The Canadian Press while standing in a cramped aisle inside the store.

Huang said he knew little about Lin because they only had brief chats when changing shifts at the store. The Concordia University student, who worked about 10 hours a week after being hired last August, minded the shop by himself.

"Everything I know is after this accident," said Huang, who handed his store's security tape over to police on Thursday.

"I knew nothing about his personal life before that."

Montreal police say Magnotta and Lin knew each other and believe the killing happened sometime overnight between last Thursday and Friday.

Lin, a native of China, was reported missing by an acquaintance on Tuesday -- the same day the torso was discovered outside Magnotta's apartment building.

He moved on May 1 into a downtown Montreal apartment, where the concierge said he knew him simply as Justin.

Alfredo Hedriana said Lin also lived with a roommate, who recently left for China for a vacation.

"I heard that there was a body found, but I didn't pay attention.

"But this morning, when I heard that it's one of my tenants, I was shocked."

Hedriana also said four of Lin's friends -- one woman and three men -- came to the building looking for him two days before the torso was found.

Lin also kept a Facebook profile, which referred to him as Patrick Lin.

Only two personal photos, posted in December 2010, can be accessed on the page due to its privacy settings. It is not clear where they were taken.

Concordia said Lin was registered as an undergraduate student in the faculty of engineering and computer science.

"We are saddened to learn of this loss of life and it has affected our community, especially those who knew him," university president Frederick Lowy said in a statement. He added that counselling is available for those who need it.

But the horror surrounding Lin's death reached beyond the university and Montreal.

The same day the torso was discovered, a severed foot was found in a parcel mailed to Conservative party headquarters in Ottawa. A hand was later discovered inside a package addressed to the Liberal Party of Canada at a postal warehouse in the city.

Montreal police issued a Canada-wide arrest warrant for Magnotta, who has since been added to Interpol's wanted persons list. He is wanted for first-degree murder, defiling a corpse and on other charges.@

Media reports citing unnamed sources have indicated that Magnotta fled to France, but Montreal police would only confirm that he flew to Europe last Saturday.

"I'm not going to say which country because, if I did that, people would limit their search to that country," Lafreniere said.

"And as you know, people who travel in Europe can jump from one country to another without even having a passport.

"He could be anywhere in Europe and there's even been talk he might have returned to Canada under another identity."

Magnotta, who had his name legally changed in 2006 from his given name of Eric Clinton Kirk Newman, has used many aliases over the years. Police believe he may be using different names to avoid capture.

In online postings, the Toronto-born Magnotta has described himself an expert in identity change and escape.

Back in Montreal, a woman who works at a business close to Huang's corner store screamed when she was told Lin had been the victim of the grisly crime.

The woman, who was afraid to have her name published, said she frequently chatted with Lin at the store. She called him a youthful and pleasant guy.

"What kind of a psychopath would do something like that?" the woman asked after catching her breath.

"You know what you've got to think about? It's not safe. That idiot's out there and he did that -- and he could do it to any one of us."

Locals filed in and out of Huang's busy convenience store on Friday afternoon, all of them unaware of its connection to the dead man.

One customer looked at a photo of Magnotta on the front page of a local newspaper, as he waited in line to buy a can of beer.

"There are lots of them (scary people) out there," he said, shaking his head.

Locals in the neighbourhood said they didn't know who Lin was, even when shown a picture.

Huang, however, is holding out hope that police may have made a mistake -- and that Lin might still be alive.

Police are still awaiting the result of a DNA analysis to be absolutely certain that Lin was the victim.

"We're 99.999-per-cent it's that person," Lafreniere told reporters in Montreal.

That's enough for Huang to keep a sliver of optimism. 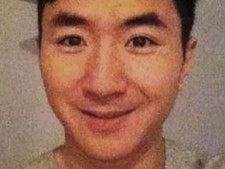 Jun Lin, the Concordia University student who was murdered and dismembered in Montreal, is seen in this undated handout photo. (CTV)

Jun Lin, the Concordia University student who was murdered and dismembered in Montreal, is seen in this undated handout photo. (CTV) 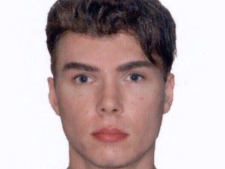 Luka Rocco Magnotta, who is accused of killing and dismembering a man, and then mailing his body parts, is pictured in a photo on Interpol's website. (Interpol)