Two men are dead and a third is in police custody after some kind of incident at a Schomberg-area business late Tuesday morning, York Regional Police say.

Police are treating the incident as a double homicide.

The victims, 74 year-old Bill Jones and 78 year old Jim Wilson, were found without vital signs when police officers and King Township firefighters arrived at a Quonset hut on Lloydtown Aurora Road, just east of Highway 27, at about 10:25 a.m.

Police spokeswoman Const. Rebecca Boyd said one man was pronounced dead at the scene, while a second died after he was taken from the scene by paramedics.

Located southeast of Schomberg, the property is occupied by James Elliott Underground Construction, described by police as a family-owned business.

Both victims were employed as mechanics, police said.

A third person, identified as an employee, was taken away from the scene in handcuffs.

Police haven't released any information about how the injuries were inflicted, but both victims suffered head injuries.

Officers responded to the business when a co-worker found the victims on the floor of the hut, police told CP24.

As of 12:15 p.m., the scene is surrounded by yellow police tape. Footage from Chopper 24 showed several police cars and fire trucks at the scene.

Employees are known to do maintenance and repairs on excavation equipment inside the Quonset hut.

With a report from CP24's Cam Woolley 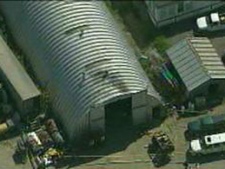 Police and firefighters at the scene of an incident at a Schomberg-area business Tuesday, Aug. 30, 2011.