The woman was returning to her apartment at 500 Murray Ross Pkwy. at about 11:50 p.m. when she was confronted by three men in their twenties.

Police say the victim was allegedly threatened and taken to a secluded area where she was assaulted.

The woman was taken to hospital with very serious injuries, police say. While the building where she lives is not an official residence, police say many York students live there.

No arrests have been made and no suspect descriptions have been released. 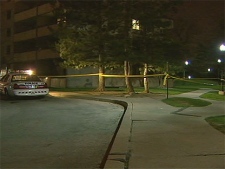 Police are investigating after a 20-year-old woman was sexually assaulted near York University Tuesday night.