Toronto police are looking into a suspicious fire that occurred at a church early Wednesday morning.

At about 1:30 a.m., fire crews were called to the Canadian Martyrs Church on Plains Road, near Woodbine Avenue and O'Connor Drive.

There, they found a fire in a garage attached to the church. Firefighters quickly extinguished the blaze.

A nearby school, Canadian Martyrs Catholic School, was untouched.

This is the second suspicious fire at a GTA church in as many days.

On Tuesday, firefighters were called to a blaze at St. Jerome's Roman Catholic Church in Brampton, where a police bomb squad recovered a possible pipe bomb that was tossed through a window. Police later detonated the object.

There is no information to suggest the church fires are linked. 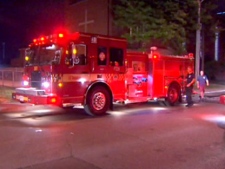 Police are investigating a suspicious fire at a church in Toronto's east end.