Toronto police have released video footage of a brazen armed robbery inside a Parkdale variety store.

Two suspects entered the store in the Sorauren Avenue and Queen Street West area at about 8 p.m. on Jan. 4. Unbeknownst to them, a video surveillance camera perched behind the cashier caught them on tape from the moment they walked into the store.

The video shows one of the suspects jumping over the counter and grabbing the clerk while another points a black handgun at him.

The suspects are alleged to have fled with the quantity of money. The clerk was not injured in the melee.

The first suspect is described as brown, about five-foot-six and between the ages of 18 and 25. He was last seen wearing a black puffy vest with a black hoodie underneath.

The second suspect is described as being about five-foot-six with a medium build. He was last seen wearing a black leather jacket with a black bandana partially covering his face. He was carrying a black handgun at the time of the robbery.

According to police, a third suspect stayed outside and acted as a lookout.

No description has been released for that suspect. 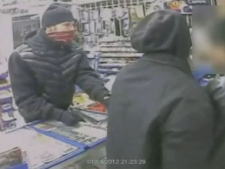 Two suspects in an armed robbery are shown in this surveillance camera image.