Portion of land transfer tax will be scrapped: Ford

Mayor Rob Ford is reaffirming his commitment to eliminating a much maligned tax.

In a sit-down interview Thursday morning with CP24 Political Specialist Stephen LeDrew, Ford said the land transfer tax will be reduced in 2012 and completely eliminated by 2015.

The tax, first introduced by David Miller in 2008, pumps about $204 million into city coffers annually.

It is added onto the cost of all real estate purchases and is levied in addition to a provincial land transfer tax.

"I campaigned I would abolish it by the end of my term and I am sticking to my promise," Ford said. "I can't say we will wipe it all out this year, but we are going to do it piece by piece and you will see a portion of the land transfer tax gone by next year."

In a wide ranging interview Friday, Ford talked at length about spending at city hall, the mounting deficit, his handling of ‘Occupy Toronto' and public transit.

On his controversial plan to scrap Miller's Transit City plan and embark on a costly subway-building mission, Ford said he'd do it all again. His opponents claimed changing the city-wide transit plan came at a cost of $65 million. Ford called those claims "fictitious."

"Let me tell you about Transit City. It was a disaster and I'll give you an example," he said. "Look at St. Clair. They said it would cost $40 million. I said at the time it would hurt business, which it has, hurt residential areas, which it has, and be over budget. We still don't know the final numbers and it is already at $120 million and it is a traffic nightmare."

Ford said under his plan, work has already begun on a new Eglinton Avenue subway and that the extension of the Sheppard subway line from Downsview to Scarborough Town Centre stations will begin "next year or the year after".

That project has already received $333 million in federal funding, Ford said, but will need provincial funding to become a reality.

"I have to sit down with Premier McGuinty and get funding from the provincial government," he said. "They have to step up to the plate. Some of the things that fall under provincial jurisdiction I am not paying for anymore."

As for the budget crisis at city hall, Ford again spoke of the need to "find efficiencies."

He rebuffed the notion that by making cuts to city libraries and recreational facilities and setting off on a path to sell three city-owned theatres, he was reneging on a campaign promise not to cut services.

"It's misleading information," he said. "People elected me to reduce the size and cost of government and that is exactly what I have done and what I will continue to do over the next few years."

And that just may include layoffs.

In September, more than 1,100 city employees submitted applications to a buyout program that was offered for a limited time.

At the time, City Manager Joe Pennachetti predicted the buyouts could save about $58 million annually, however the city is facing a $774 budget shortfall in 2012 alone.

"If you look back 13 years ago when we merged municipalities together, the number of employees should have went down but it went up (by) 8,000 (people,)" Ford said. "That doesn't make any sense. Why would you merge Etobicoke, North York and Scarborough and increase employees? We have to start running the city like a business."

The mayor also commented on the ongoing negotiations with the unions, telling LeDrew he'd like to see members get a fair deal while making sure that taxpayers are getting the most value for their dollar.

(To read more on the city's dispute with the unions click here.)

Ford said fiscal responsibility and "changing the culture" at city hall is at the heart of that, but said customer service plays a role as well.

In keeping with that, he offered up his home telephone number on the air to any Torontonian with a problem and announced that Ford Fest, the annual party held in his mother Diane's backyard – would be expanded to Scarborough or North York in 2012. This year's event drew 3,000 people.

"I'd like to do two or three a year," he said. "They are great parties. Everyone has a hamburger, pop or beer and just has a great time."

Before wrapping up the interview, LeDrew asked Ford whether he would attend any Pride events in 2012. This year, Ford didn't attend the Pride parade, opting to go to the cottage with his family instead to keep up with a family tradition.

Ford told LeDrew that he didn't attend other Pride events not because he doesn't support the movement but because it conflicted with other events on his schedule.

The mayor continued to say that he would like to see all parades and festivals in the city funded by the private sector instead of taxpayer dollars.

"I support anyone and everything and every festival possible," he said. "My only thing is that I think the private sector should be paying for it and I have always said that." 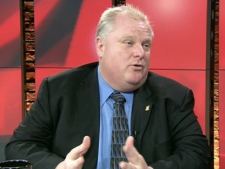